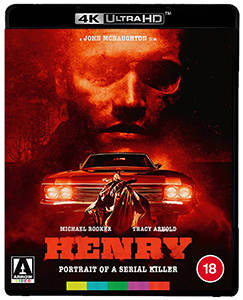 I remember watching Henry: Portrait of a Serial Killer back when it was released, then searching the classified ads for the (inevitably 7th generation grainy VHS) uncut version once I’d discovered that what I first watched was censored.

Now all these years later I get to watch this Arrow Films 4K UHD blu-ray in all its glory, complete with a slew of great special features.

Ex-con Henry (Michael Rooker) moves to Chicago and shacks up with Otis (Tom Towles); an old acquaintance from their time in “the big house”.

When Otis’s younger sister Becky (Tracy Arnold) also moves in, the dynamic between Henry and Otis begins to change, with Henry becoming extremely protective of her.

Already having left a trail of dead women behind him, Henry drags Otis into his dark sadistic world, upping the violence and body count until Chicago is no longer a safe place for them to stay.

Henry: Portrait of a Serial Killer is a tough watch, especially in this 4K release where every violent act and every look of anguish is so clear and palpable. It is also an incredibly moving experience too, playing with your emotions as you sit helpless watching innocent people succumb to the whims of Henry and Otis as they satiate their darkest desires, feeling zero empathy for the ever growing number of victims they leave in their enraged wake.

The performances from the 3 leads are superb, with Rooker’s depiction of Henry having such a strong affect on me that I still associate him as Henry all these years later…yes, even after watching Cliffhanger into double figures too!

35+ years later it has lost none of its impact or shock value, with the scene involving a video camera and a family still making me feel very uncomfortable all these years later, continuing on through the following scene where Otis is transfixed replaying the footage on video one jerky frame at a time, which makes it far more terrifying than if it had been nowadays with smooth slow motion digital playback.

This is another of those movies that leave you feeling that you need a shower after the end credits have rolled, which is testament to what director/co-writer John McNaughton crafted from a low budget, limited locations and a small cast & crew. Slow paced scenes and minimal dialogue allow the atmosphere to build, ultimately culminating in a sudden outburst of violence that shocks no matter how much you knew that it was inevitable.

Loosely based on convicted real life serial killers Henry Lee Lucas and Ottis Toole, this gritty crime drama grabs you by the throat from its opening shot and keeps its grip tight through its entire 83 minutes, leaving you finally able to breathe as the end credits roll.

I’ve always loved this movie, and now I have the ultimate version to own thanks to Arrow Films…and so should you.

The always extensive set of Arrow Films special features completes a great package that is a welcome addition to anyones collection.