Review: One of Our Aircraft is Missing 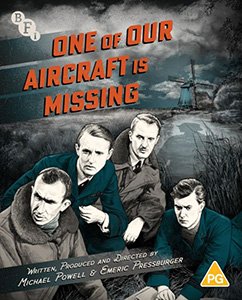 A WWII movie made while WWII was actually happening, One of Our Aircraft is Missing follows the crew of a Wellington bomber who are shot down over occupied Holland and must try to safely make their way back home.

Produced and directed by Michael Powell and Emeric Pressburger, this Academy Award-nominated drama stars a medley of British acting icons, including Eric Portman, Bernard Miles and Googie Withers, appearing in one of her first major film roles.

One of the crew members being separated from the group as they parachute out of the burning bomber over Holland immediately adds tension, as the remaining crew don’t know where he is or even if he survived, and the tension mounts as they use a network of courageous Dutch civilians to help them navigate the German occupied roads and towns.

In fact, while the British bomber crew are the ‘stars’ of the movie, it is the Dutch people who are the ‘STARS’ of the movie, selflessly doing whatever is needed to help the British stay safe. All of which is beautifully encapsulated in one particular speech by Googie Withers character when she explains what the sound of the British air raids mean to them.

With no bombastic war scenes or extended action set pieces, One of Our Aircraft is Missing keeps the tension high with superb acting, likeable characters, and the assured direction of Powell and Pressburger.

The special features flesh out the wartime experience even further, giving an insight into what it was like to live through those times.

One of Our Aircraft is Missing is released 4th October 2021.

Review by Dave from a disc kindly supplied by BFI.