Review: Out of Africa 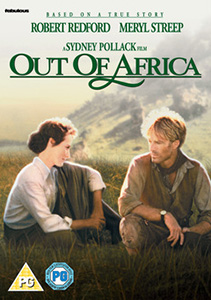 Out of Africa is one of those barnstorming multi-Oscar winning films that everyone loves and was a huge success both financially and critically.

Featuring Meryl Streep (whose accent is of course impeccable and her acting first class) as Karen Blixen, she recalls her life in Africa where in 1913 where she accepts a marriage proposal from Baron Bror Blixen (Klaus Maria Brandauer), a poor aristocrat who lives near Nairobi in Africa.

The first half of the film we see Bror take all her money, go back on promises and basically be an uncaring bastard (how dare he, this is Meryl damn it!).  The scene is set for her to look alsewhere for love, enter dashingly handsome Denys Finch Hatton (Robert Redford who I believe was supposed to be British).

Karen comes to love Africa and the African people, and the incredibly slow ponderous pace of the story is forgotten somewhat when you see the amazing scenery in the film.

She establishes a school for the indigenous workers, looks after their medical needs, and arbitrates their disputes. She also tries to establish a formal European home life similar to the other upper class colonists in the area, but Bror is not interested.

The second half of the film is her relationship with Denys, and the first world war. Karen discovers that Bror has given her syphilis. She returns to Denmark for treatment and recuperation, she returns and Karen and Denys move in together. Denys is then unfaithful to her causing them to split.

It is a beautiful looking soap opera with a story even I have trouble recalling.

I used to live in Los Angeles and write about Rock bands. Now I live in wonderful Wales and write about films. I like video games (especially RDR2) and am also a painter...gratuitous plug: follow my art account on Instagram @artbytinar
ABC of gaming: August – October 2019 Review: Secret Ceremony