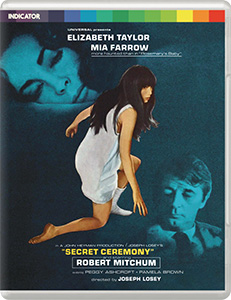 Secret Ceremony is one of those films I’d heard about but never seen. Directed by Joseph Losey of  ‘The Servant’ fame, this could have equally starred Dirk Bogarde and James Fox and the female roles replaced by males.

It’s an odd film, disjointed and on reading up on it I think there is a ‘directors’ version, as apparently the ‘are they lesbian?’ bits were removed before release (if you google the film there are pictures of Farrow and Taylor sharing a bath which isn’t in the film).

Elizabeth Taylor plays Leonora, who again on reading up on the background to the film it states is a prostitute, which came as a surprise as she just seems to be a hysterically grieving (overacting) Liz Taylor. No hint of prostitution.

Also starring  Mia Farrow as Cenci…at this time Farrow was married to Frank Sinatra and was about to star in her most famous film straight after this one – Rosemary’s Baby.

The film is more or less silent for the first 8 minutes while Cenci stalks Leonora because she looks like her dead mum. Leonora somehow ends up living with poor little unhinged rich girl Cenci and they play mummy and daughter until Cenci’s stepfather Albert (a not very menacing Robert Mitchum) arrives to cock it all up, literally. Is he a paedophile who’s been abusing Cenci leading to her mental state or … Ummm I don’t know.

The real star of this film is the amazing Arts and Crafts style house its filmed in. Wow its beautiful (Debenham House, Holland Park district of Kensington and Chelsea) and its worth watching just to roam around the rooms with Liz.

This is such an odd film, it’s not like Losey was trying to be weird on purpose, and the actors really do amp it up to camp, but I was absolutely glued to it, along with the extras including the very strange top and tail additions of a psychiatrist talking to a detective to ‘explain’ the ending.

Powerhouse Films/Indicator do have this ability to find the most extraordinary films to release, and this is another one. Bonkers but somehow entertainingly good.

Secret Ceremony will be released on November 25th, 2019.

I used to live in Los Angeles and write about Rock bands. Now I live in wonderful Wales and write about films. I like video games (especially RDR2) and am also a painter...gratuitous plug: follow my art account on Instagram @artbytinar
Review: Out of Africa Review: Making Waves – The Art of Cinematic Sound