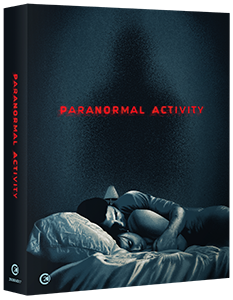 You wouldn’t think that the home videos of a young couple filmed entirely in their home would make for riveting viewing. But throw in an unseen demonic entity into the mix and you have 86 minutes where you slowly find yourself gripping the arms of the couch ever tighter with every passing minute.

Katie (Katie Featherston) and Micah (Micah Sloat) have noticed strange happenings in their home, and so Micah decides to use his video camera to try and capture what the cause of everything is.

However, Katie is forced to admit that this is not something new to her, and she has suspected that a strange demonic force has been following her since she was a child.

Micah, naturally upset that this wasn’t disclosed to him before they moved in together, sets it upon himself to rid her of this demon once and for all.

Needless to say, that doesn’t end up being the best idea he’s ever had.

Writer/director Oren Peli uses sound design and lighting to great effect, giving dark empty spaces an ominous feeling where evil could be dwelling, ready to make itself known at any moment. While the 2 lead actors are naturalistic and completely sell the premise that their lives are slowly being consumed by this ominous evil force.

Paranormal Activity redefined the found footage genre (as Host has recently done) and was a huge hit which spawned a slew of sequels, as well as giving the horror community another iconic scene which never gets old, no matter how many times you watch it.

Second Sight Films once again release another limited edition blu-ray that is beautifully packaged and comes complete with superb special features, which includes 2 fascinating commentary tracks, interviews, a deleted scene, and 2 other endings…my favourite ending involves a close up of Katie in the bedroom.

A visual and aural attack on the senses, this will have you checking the darker corners of your rooms for a long time after the end credits have rolled and is still just as tense as it was when it was released.

Second Sight Films give us yet another definitive version of a movie to own.

Review by Dave from a disc kindly supplied by Second Sight Films via Aim Publicity.