Review: The Boys Next Door 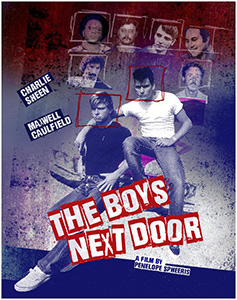 Number 22 of 101 Films ‘Black Label’ series of releases (see here for the full list), 1985’s The Boys Next Door is a violent crime thriller written by Glen Morgan and James Wong (The X Files) and directed by Penelope Spheeris (Wayne’s World).

Maxwell Caulfield and Charlie Sheen star as Roy & Bo: two young men, who having just graduated high school, see nothing but despair in front of them and a lifetime stuck working in the local factory.

They decide to have one last blow out and drive across country to Los Angeles and indulge themselves in everything they’ve ever wanted to do before factory life has them trapped.

Arriving in the City of Angels, headstrong Roy has plans that far exceed what Bo was expecting them to do, but he has no option but to go along with them anyway.

What follows is a weekend of escalating violence that can only end badly for them both.

Gritty in atmosphere and often uncomfortable to watch, both Caulfield and Sheen excel in their portrayals of 2 teenage kids feeling that their destiny is already predestined and their current lives insignificant to others. This is played out in various scenes, including one where Roy’s father completely ignores him, despite being confined in a small trailer with nothing but the TV to distract his attention from his own son.

These are 2 kids who are not pushed to commit violence by 1 major incident in their lives, but through a succession of smaller interactions where they were made to feel worthless. Something which makes their weekend in Los Angeles an epiphany for them, and especially for Roy, as they realise that that can do anything they want to without having to try and seek the approval of others.

Still hitting as hard as it did back in 1985, The Boys Next Door takes you on a journey that will stay long in the memory.

Great special features and packaging once again from 101 Films in their Black Labels releases, this is one to add to your collection ASAP.

The Boys Next Door is released 6th September 2021.