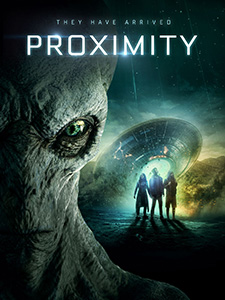 Isaac (Ryan Masson) is a young NASA employee, who while vlogging about himself on a hiking trip that is supposed to help with his ongoing mental issues, witnesses an object falling from the sky.

His curiosity makes him head towards the crash site, when suddenly he is confronted by a classic “grey alien” and abducted, appearing days later with little memory of what happened to him.

Capturing this meeting and abduction only very briefly on tape, Isaac is met with scorn and disbelief when trying to get his story out to the people.

Enter Sara (Highdee Kuan); a young woman who also claims to have been abducted, and it is through joining together that they embark on a journey to try and discover the truth, and to get it out to the general public.

There are of course government agencies who want to suppress all knowledge of any alien intervention, and will stop at nothing to keep it hidden.

Proximity is written and directed by Eric Demeusy, making his feature film debut after helming and writing several shorts. He is also part of the visual effects team behind Stranger Things and Game of Thrones, which goes some way to explaining the effects used as the movie progresses.

The narrative begins in quite an intimate way, creating empathy for Isaac as he is shown as a troubled loner who is obsessed with the stars, and it is the 1st act of the movie that I enjoyed the most. Sparse on visual effects, the focus is on Isaac as he not only tries to discover himself, he also begins a journey trying to discover the truth about alien abductions and the mistrust of all around him.

The tone of the movie changes when Sara enters into Isaac’s life, and their global trek becomes evermore outrageous with each new person they come into contact with.

Robots are sent after them, which culminates in a battle scene on a train. Shady government officials tick off every bad guy trope in the book. Hippy anti-establishment man drops everything to help out, while mistrustful fellow alien abductee (and every day Joe turned into tech genius) becomes the final piece in an increasingly bizarre jigsaw puzzle.

There’s also some mind bending quantum physics/invisibility shenanigans thrown in for good measure too, as the whole story leaps to its finale.

I really enjoyed Proximity, but I found that the more outrageous and SFX heavy it got, the less that I cared about the characters. To the point that my initial empathy for Isaac was worn away long before he pulled off his final magic trick.

I have no idea if part of the deal with Eric Demeusy was to use as many visual effects as possible, but it’s a damn shame that it went so far off the rails with them. I’d have loved to have kept the intimate tone from Act 1 continuing throughout the whole movie, with just little hints at everything else that was tied into the life of Isaac.

While there are many alien abduction movies out there, I would still recommend Proximity as a movie to watch, with the caveat that maybe a few stiff drinks as the running time progresses may well help to make the escalating action all the more believable.

Getting "in the zone" and already having a great time with it. @R8Games twitter.com/60MWPodcast/st… pic.twitter.com/LFmX4j031W

RT @ArrowFilmsVideo Tools at the ready - We want to see your pumpkin carving skills! 🎃 Get in the Halloween spirit early and join in the #AVCARVEOFF. Winning entries will receive an Arrow Video Bundle - Comp closes 11:59pm BST Oct 30 - Get crafting! pic.twitter.com/xk23f61G1I

Back in May last year I had the pleasure of meeting the team behind Pacer: 60minuteswith.co.uk/live-even… Now, 2 days before its launch on PS4, Xbox One & PC, I'm getting to play it on my PS4. Review on our website soon. @R8Games pic.twitter.com/3PWBWJ9vPJ

RT @SecondSightFilm **DAWN OF THE DEAD: THE TRAILER** With release round the corner a big thx to our friends @FinalFramePost @FidelityUHD @SeverinFilms. Ltd to only 12,000 UHD & 6,000 Blu-ray - don’t miss out! Order at bit.ly/Dawn4KUHD bit.ly/DawnBluRay and get 4 exclusive art cards! pic.twitter.com/aYZXkkKghl

RT @grimmfest We are delighted to announce that #Grimmfest has been named by @moviemakermag as one of the World’s 50 Best Genre Fests of 2021!!! grimmfest.com/grimmupnorth/2… pic.twitter.com/YDYKDbXIvg