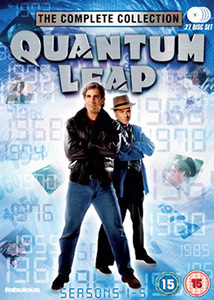 Quantum Leap first aired in the UK in 1990 on BBC 2. I missed it. I was in Los Angeles and had already become quite obsessed with this sci-fi tale of Dr. Sam Beckett (the gorgeous Scott Bakula); a physicist who figuratively ‘leaps’ through his own lifetime skipping from person to person to right wrongs. Let me explain in case you haven’t seen it. We, the audience see Scott, the people in the actual story see the original person. Much like Takeshi Kovacs (hey, I read that shit before Netflix made it) wears a ‘Sleeve’. Sam also wears a human ‘sleeve’.

The original person is back at base, with Admiral Al Calavicci (Dean Stockwell – The Boy with Green hair! Oh Google it, I can’t help knowing these things. He’s also in Blue Velvet), Sam’s womanizing, cigar-smoking, very Un-PC best friend, who appears to him as a hologram (invisible to everyone but Sam, dogs and small children), and helps him work out why he’s in that person and what wrong must be righted.

Sam can’t remember a lot of things (like his wife – convenient as he does a lot of snogging) and soon realises he must alter an event in the period he is in, to re-engage the Quantum Leap process and return home.

Sam’s leap’s can vary from saving a life, to stopping bullying, and a thread goes through each episode and season, that even the smallest change can ripple through history. Over 5 series Sam saves lives, like Jacqueline Kennedy’s when he leaps into Lee Harvey Oswald, and even Marilyn Monroe’s, dissuading her from suicide. He suggests the lyrics ‘Peggy Sue’ to Buddy Holly, and ironically when picking up a child in his cab for one story, suggests that real estate is a thing to get into to. The Kid is Donald Trump. But this is much more than glimpses into history, we also see him save his brother in Vietnam and eventually give Al a happy life with his wife.

So in all, this is an eclectic series, funny, and poignant, a real one off. Entertaining (I am terrible for fast forwarding things, I didn’t hit the FF button once), and heartwarming.

Stockwell plays Al as a sex obsessed dinosaur, we later learn the reason, and he is a perfect foil to Bakula’s kind, empathetic ‘everyman’ (no one could embody a James Stewart- type on TV better). But for me, what rises this particular series above just entertainment is some of the issues covered, and surprisingly the ones where it involves a woman, the writers stuck Bakula in a dress and heels, and although he looked like a wonky 1970’s drag queen, it worked. One episode in particular stands out, ‘Raped’, which I’m sure by title alone, put off an awful lot of viewers. It tells the story (and remember this is the early 90’s) of a date rape, subsequent trial, and acquittal of the man, featuring Sam on the stand telling the jury how ‘she’ was attacked. Brave stuff, and also quite shocking for its time.

We get a lot of films to review, and also box sets of TV series. Luckily I was familiar with Quantum Leap, but decided to watch at least 2-3 out of each season. I ended up watching the whole lot. So apologies to Fabulous Films for the delay in this review.

Quantum Leap is a truly fantastic series (yes, I’m biased) that I do think resonates today. It made bold choices at the time and gave us stories with heart.

The ONLY gripe I have about Quantum Leap is – the very last episode. Along with other great series in a long line of ‘We don’t know how to end it’… this could have been a great ending, but it isn’t. So maybe watch the penultimate episode, of young Elvis doing his thang, and skip the last one, knowing that some day Sam Beckett might leap into you, and dressed in your clothes, wearing your skin, he’ll clean the toilets, iron, cook, pick up the dog poo and have sex with your husband.

Review by Tina (co-host of 60 Minutes With) from a box set kindly supplied by Fabulous Films.

Quantum Leap: The Complete Collection is released on 15th June 2020.

I used to live in Los Angeles and write about Rock bands. Now I live in wonderful Wales and write about films. I like video games (especially RDR2) and am also a painter...gratuitous plug: follow my art account on Instagram @artbytinar
Soundcheck Themed Tunes: Live (Part 2) Review: The Woman/Offspring