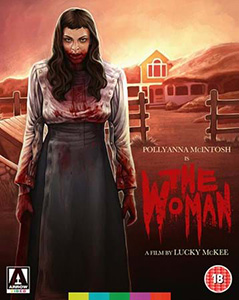 This double release from Arrow features two films both centred on Pollyanna McIntosh as ‘The Woman’.

When a young girl’s mutilated body is discovered in the town of Dead River, the local police immediately suspect a nomadic family of cannibals, which in itself is surprising. The cops KNOW about a family of ‘nomadic cannibals’?  Say WHAT?

This could either be epic, or, as is the case of ‘Offspring,’ a bit of a missed opportunity.

Andrew van den Houten’s film is the beginning of a trilogy (Offspring, The Woman, and Darlin’), and it’s a good example of having  all the ingredients for the perfect recipe, but ends up mostly falling flat on its gore covered face in its depiction of  the modern world in conflict with basic human depravity/inhumanity demonstrated by the guttural, primitive tribe of cannibals, who kill at random and eat their victims.
Oh and they also have a thing for collecting babies, or as I like to say: “BAYbeeeees“.

The story is straight out of a 70s slasher. Small town, grisly death, a ‘knowing’ police force (nomadic cannibals, FFS wouldn’t they have been locked up by 2010?).

The one massive inescapable flaw (besides the nomadic cannibal thing) is the terrible cannibal acting. Only Pollyanna McIntosh, who utters the word BAYBEEE like a … cannibal ….is believable. The group are not intimidating, they are …plain dirty. They should be a group so bent on eating you that you couldn’t reason with them, but there is no terror, just gloopy entrail eating and guttural groans, and the constant incredulity that this is a nomadic tribe of Cannibals, in America in 2009, and THEY’VE NEVER BEEN CAUGHT.

There’s real explanantion of their being, and this is what I missed. The police chief mentions something about a lighthouse keeper and his remaining family, but I kept wondering HOW they are still at large. In a cave. Near the town.

The tone of the film moves around a lot too, is it a home invasion film? A straight up horror? Or just a bit …silly. Well yes it IS silly, and rather annoying at times, but while I sat and tutted, Dave lapped it up and enjoyed it more than I. (I really enjoyed both of these films, as I did Darlin’ when I saw it at Grimmfest last year- Dave).

Offspring ends and sets up the continuing story of ‘the Woman’ whose ‘adventures’ we see in the 2011 film directed by Lucky McKee.

Pollyanna McIntosh returns as the feral ‘heroine/villain’ as we see her from afar, living alone now after losing her tribe but still eating people/animals/stuff with blood in.

This is a far more interesting film despite its flaws. Here we have a close-up view of humanity in all its splendour by showing us the family Cleek: Dad Chris, a seemingly nerdy country lawyer sits with his family at a neighbours party. His teenage daughter, Peggy sits in baggy clothes (what is she hiding?) upset. His son, “Brian the twat”, watches as a couple of boys bully a small girl and makes no effort to help her. Youngest daughter Darlin’ (ahaaa so… the 3rd film must be about her?) is ‘normal’, and his wife Belle is timid and probably doped up on Prozac.

Chris is the neighbourhood psycho. While he’s out hunting, he happens upon the woman, knocks her out and restrains her in a cellar. He then introduces the family to her and demands they participate in ‘civilising’ her.

From here on we must judge who is worse: Cannibal chained up woman or psycho family? I really find it difficult when horror films set up a ‘baddie’ to then turn them into a dark edged ‘goody’ in the next film, and this is what happens here. The woman is abused, repeatedly raped, and finally when the shit hits the fan, you are supposed to root for her, having seen her kill, kidnap and munch a few BAYBEEEES in the previous story. It’s hard to because she is just as bad as this family. At least the acting is a LOT better in this film, and the story is more entertaining too. A single cannibal nomad is more believable than a tribe full.

There is a subplot involving a pregnant daughter and nosy teacher, and you never really know if this was an incest story that was cut.

The end of the film is, I thought, supposed to be a surprise horrific ending where there is evidence that the family have kidnapped other women and held them captive. However I recently read that the eyeless girl in the dog cage is another of the Cleeks’ daughters named ‘Socket’ who behaves like a dog.
Sigh.

And…we have a another ‘open’ ending to prompt another film. Now as much as I’ve moaned about these movies I admit I’m intrigued to see the last part, ‘Darlin’ directed by McIntosh.

Another great package from Arrow, chock full of extras.

DISC ONE – THE WOMAN

Review by Tina (co-host of 60 Minutes With) from discs kindly supplied by Arrow Films via Fetch Publicity.

I used to live in Los Angeles and write about Rock bands. Now I live in wonderful Wales and write about films. I like video games (especially RDR2) and am also a painter...gratuitous plug: follow my art account on Instagram @artbytinar
Review: Quantum Leap – The Complete Collection Review: Cisco Pike