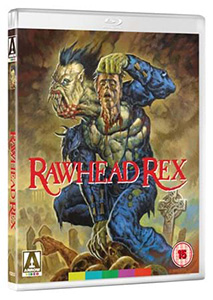 Famously written by the great Clive Barker, Rawhead Rex is a humdinger of a marmite (love it or hate it) film.

Set in 1980’s rural Ireland, it tells the tale of a monster (Rawhead Rex) who is unsuspectedly unleashed on the people and countryside. There’s no real explanation of what it is, or why, you just have to go with it.

I admit that I am rather fond of this film. On moving to Los Angeles 30 odd years ago, and suffering from jet lag, I turned the TV on in my room to be faced with Rawhead Rex slashing a man. That was 4pm and it forever quashed my belief that American TV was staid.

All these years later and does the film still hold up? Amazingly it does. Made cheaply, with no stars (except David Dukes) the only real let down is Rex himself. Whenever his face appeared onscreen I had to stifle a giggle.

The acting is superbly over the top (see Rex weeing on Priest!) and the story is pretty run of the mill (rampaging monster). But this film is…charming. It’s a product of its time and as far as Clive Barkers adaptations go, it’s pretty good!

This is a new 4K restoration from the original camera negative, and the picture really is fantastic. Of course being an Arrow release it’s chock full of amazing extras:

Rawhead Rex will be released on 14th May 2018 and you can buy it by clicking HERE. ALL money raised by purchasing from Amazon via our website is given back to our listeners and followers in upcoming competition prizes. The more people buy, the bigger our prizes.

Review by Tina (co-host of 60 Minutes With) from a disc kindly supplied by Arrow Films.

I used to live in Los Angeles and write about Rock bands. Now I live in wonderful Wales and write about films. I like video games (especially RDR2) and am also a painter...gratuitous plug: follow my art account on Instagram @artbytinar
ABC of gaming: April 2018 Review: Marty