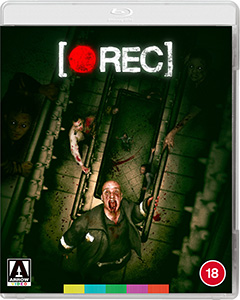 Angela (Manuela Velasco) is a young television reporter, and along with her lone cameraman are following a local fire station crew on its nightshift in the hope that something will happen to give them an exciting bit of footage to air on their show “While You Were Sleeping”.

Hoping for something a bit more ‘meaty’ than rescuing a cat from a tree, Angela doesn’t want an emergency that puts peoples lives at risk. She certainly doesn’t want (or even imagine in her wildest nightmares) to be trapped in an apartment building with a group of people as an unknown virus turns each of them into flesh eating crazy people…but that is what she gets.

While the ‘found footage’ genre had already been established by 2007, REC uses all of its inherent limitations in an inventive way that puts you in the middle of a frighteningly real situation where there is, quite literally, no escape for anyone.

The ‘shaky cam’ technique that I have groaned about in big budget action movies is used here to far better effect, putting you in the hands of a panicked cameraman as he desperately tries to capture the ever escalating events, all while also trying to hold onto his sanity as well as the camera.

The wry humour used in the early scenes at the fire station lulls you into the same relaxed frame of mind that everyone there is in, but fingers begin to tighten on the arms of the couch as the true horror begins to present itself, while arse most definitely leaves the comfort of whatever you’re sitting on when the occasional jump scare kicks in, accompanied by a 5:1 sound mix that gives your subwoofer a good workout.

REC doesn’t just rely on jump scares though, as a growing sense of unease throughout its short running time culminates in a tense final act where darkness and silence are just as terrifying as everything that preceded it.

As always with an Arrow Films release the special features are a goldmine of information and entertainment, all of which will give you a new appreciation of this Spanish horror classic.

FIRST PRESSING ONLY: Illustrated collectors’ booklet with new writing on the film by Xavier Aldana Reyes.