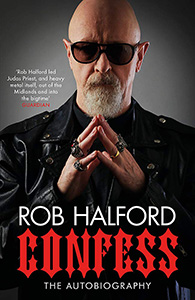 There are few ‘rock’ biographies I’d be interested to read, mainly because the author tends NOT to include the gritty, dirty, sex and drugs bits. Okay Motley Crue are an exception, but they couldn’t exactly get away with NOT telling the truth, likewise with Metal God, Rob Halford.
However, he could have taken the easy route and written a sanitised version of his life and career with Judas Priest. He doesn’t.

Halford starts at the very beginning talking about his early years and delves into how he started singing. He talks very lovingly about his close family, his flat mates and about the formation of Judas Priest. How he met Ken (KK) Glenn, Ian and…various drummers, and all in his own voice. He refers to the brummie way of talking ‘Yam Yam’, which I’m sure  is very confusing for non Brits, but the fact that you can clearly hear his voice throughout the whole of this book, makes it all the more poignant. Because this isn’t a by-the-numbers book about one of the best rock bands in the world, it’s also the story of a man tortured by his sexuality and repressed to the point of contemplating suicide.

Being frontman of a rock group while being openly gay in the 1970s was unknown (a quick nod to Freddie Mercury here, who much Like Rob, had to keep his hand on his ha’penny for far too long). Just being a gay man and out was a dangerous thing to do back then. Halford was terrified his sexuality would lead to the end of the band through homophobia, so coped by drinking heavily, self-medicating and getting into strained relationships with straight men who may have just been there because….he was famous.

Despite this being a ‘bare all’ book, this definitely isn’t a ‘feel sorry for me’ story. I laughed out loud several times reading it…he hung around KISS because Gene Simmons girlfriend was Cher, and gays love her, then the revelation of Priest recording music with Kylie Minogue’s producers Stock Aitkin and Waterman made me hoot – I’d love to hear that! ).

Some of his sexual encounters on the road underlined how lonely he was, but he finds humour in them, and throughout everything Halford’s personality and warmth come through.

I honestly couldn’t tell you how many times I’ve seen Judas Priest…a lot! From the early 80s to present day they have been, and will always be, one of my favourite bands. Halford is also one of the best singers in rock (if not the best – who else could have sung Victim of Changes?). I have also been in love with Glenn Tipton since I was 15. I think it had a lot to do with his red leather trousers.

So I was already a fan, and perhaps the most interesting thing about this book, of Rob Halford quite literary/literally baring his soul to the reader was, we already knew.

Although this does chart his career from Judas Priest to Fight, 2wo and Halford, this is essentially HIS story, it’s about him, how he felt, his demons and…his quest for love.
But the main theme is him pushing against his ‘gayness’ in order to save his band, denying his true self so he could maintain the one thing he loved – being a musician.

So reading this very entertaining book also made me feel a little sorrowful that he was trapped by his own success, when his fans, well….we all knew he was gay. It was…unspoken, and is made no difference whatsoever. Just look at any photo of Judas Priest and there he is, the Queen of Metal. Whip in hand. Magnificent.

He speaks so warmly about his family, about Thomas his partner, about the band and especially about Glenn Tipton who’s diagnosis of Parkinson’s was a sad day for us all.  It also ends on a positive note which is what we all need at the moment.

As Rob is 70 this year, I’m looking forward to his next book, and the next chapter of Judas priest.

A great read, a true story told with humour and love.

I used to live in Los Angeles and write about Rock bands. Now I live in wonderful Wales and write about films. I like video games (especially RDR2) and am also a painter...gratuitous plug: follow my art account on Instagram @artbytinar
Review: REC Soundcheck Memories Part 3