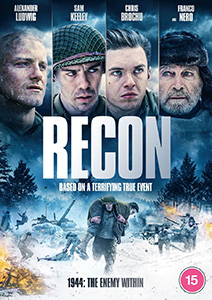 Based on the critically acclaimed novel Peace by Richard Bausch, four American soldiers set out on the gruelling ascent of an Italian mountain-side during the final days of the Second World War.

Aided by an Italian civilian (Franco Nero) after witnessing the murder of an innocent woman by their Sergeant, the soldiers physical and mental conditions are pushed to the limit in a battle to survive freezing cold weather, advancing enemy troops, and following a guide they don’t know if they can trust.

Recon is a slow movie in many ways; the narrative unfolds at the same pace as the soldiers slow progress across the icy mountainside, with only momentary moments of action to break everything up.

However, when these moments do happen they are even more shocking, all due to the previous time spent with the soldiers and getting to know their characters as they chat to each other, often with tempers flaring due to to ever more pressurised conditions they find themselves in.

Each character has time to impress their own personality upon the viewer, with each actor playing a convincing part, all of which means that their fate is all the more nail biting when the suspense ramps up.

Franco Nero doesn’t have too many lines or screen time, but his incredible screen presence keeps him a constant throughout the entire movie, with his character playing an ever more pivotal role the further the narrative processes.

A tense slow burner where the cold weather and impending danger is palpable, Recon shows that you don’t need constant gunfire and action scenes to engage your audience in a war story.

Review by Dave from a screening link kindly supplied by Dazzler Media via The Warrior Agency.

Should hopefully be chatting with Robin closer to the release of this album 🤘🏻 twitter.com/60MWPodcast/st…