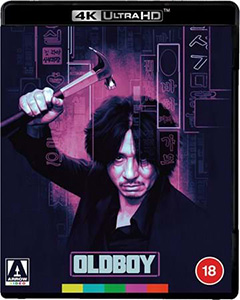 Based on the Japanese manga of the same name, Oldboy tells the story of Oh Dae-su (Choi Min-sik) who is taken from the streets after a drunken night out and finds himself locked up in a sparse single room apartment.

Not knowing who did it, why they did it, or how long he is going to be there, Dae-su watches the television and trains himself to fight as the months slowly turn into years…15 of them to be exact, when he is then released.

And so begins the journey to try and find the answers to his abduction…and all within a 5 day time limit.

Beautifully presented in this UHD release from Arrow Films (their 6th UHD release so far), the night scenes have a clarity of detail that was previously lost in previous releases, while the surround sound had me pausing the film at one point as the ambient effects had me convinced that someone was outside the house!

The widely known ‘one shot fight scene in the corridor’ has never looked or sounded better, bringing to the fore the sheer exhaustion of all involved both in the expressions on their pained faces, as well as the laboured breathing as the fight continues.

Oldboy isn’t just about the violence, though when it happens it is it sure as hell packs a punch (pun fully intended). The twisting narrative, superb performances by the lead actors, assured and fluid direction by Chan-wook Park, and the hypnotic cinematography by Chung-Soon Chung, all combine to create a cinematic experience that lingers long in the mind and is best experienced in this UHD release.

Grain haters will probably bemoan the fine film grain that is present, but picture detail is superb throughout.

Oldboy takes you through a wide range of emotions throughout its twisting narrative, all the while leaving you with a sense of unease as to not only how it all will end, but also as to what is going to happen in the next scene. A thoroughly thought provoking and emotional rollercoaster that you will want to get back on as soon as it ends.

Four commentary tracks and a whole lot more mean that the special features will keep you informed and entertained too.

Oldboy is released on 25th January 2020 by Arrow Films.