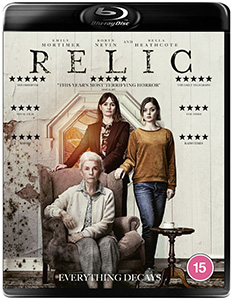 This debut feature from writer-director Natalie Erika James is a hard watch, and although it comes under the banner of ‘Horror’, it’s not so much a horror film than an allegory for the real horror of Alzheimer’s disease.

When Kay’s (Emily Mortimer) mum Edna (Robyn Nevin) goes missing, she and her daughter Sam (Bella Heathcote) travel back to the family home to find her. The house is is covered in a dark sticky mould and Edna has put post-it notes everywhere with odd messages on like –”don’t let him in“.

Edna is still missing and Sam and Kay grow increasingly disturbed by loud creaking noises from inside the walls and Kay dreams of a rotting corpse in an old shack in the woodlands.

The next day Kay finds Edna has returned, barefoot and muddied, but unaware of her own disappearance. Following a visit from a doctor, Edna is found to be mostly of sound mind and physically stable, with the exception of a large black bruise on her chest (the mould). Kay tells Sam that Edna must move into a home.

The three central performances are great, especially Nevin who is a sweet and normal granny one minute, then a nasty bitey shouting abusive woman the next. Anyone who’s dealt with people suffering from dementia or alzheimer’s will recognise the pain of losing someone they love to these awful diseases.

It’s an interesting film and one that could have gone down the path of “is it alzheimer’s, or is there something more sinister going on here?” But the metaphors of the maze-like house and creeping mould really do ram it home that, yep, these are mind-metaphors.

However, the atmosphere is creepy and I did enjoy it.

Review by Tina from a streaming link kindly supplied by Signature Entertainment via Witchfinder PR.

I used to live in Los Angeles and write about Rock bands. Now I live in wonderful Wales and write about films. I like video games (especially RDR2) and am also a painter...gratuitous plug: follow my art account on Instagram @artbytinar
Chris Bell’s supernatural chiller THE HEIRESS gets global digital release Help to keep us online in 2021