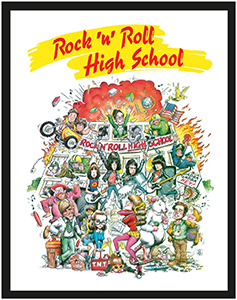 Available for the first time on Blu-ray here in the UK, Rock ‘N’ Roll High School centres around Ramones superfan Riff Randel (P.J. Soles) who is desperate to see and meet the band when they play in her local town music venue.

High school principal Miss Togar (Mary Woronov) does everything in her power to abolish any kind of fun at the school, so it is left to Riff and her friends to make their dreams come true and all go to watch the band.

That’s about it as far as any plot is concerned, while the rest of the running time is made up of the Ramones singing many of their songs in full…sometimes on stage, sometimes in a bedroom, sometimes out on the streets…basically any and every moment a Ramones song can be pushed into the slim plot.

As usual in any High School based film, everyone is way over the age that they should be (P.J. Soles was close to being 30), but this still doesn’t distract from anything, as this is all about having fun…and there’s plenty of that on display.

The low budget, non-existent narrative, hammy acting and limited locations may well put some people off watching, plus if you’re not a Ramones fan that may well deter you too.

However, the sheer sense of unbridled silliness in this film kept me entertained all the way through, and while never being a fan of the Ramones, I have to admit that their infectious energy had me warming to them by the time the end credits rolled…plus every scene that Clint Howard appears in is pure gold.

Complete with FOUR commentary tracks and a whole load of other entertaining extras, this Blu-ray release is well worth picking up…even more so if you’re a Ramones fan.