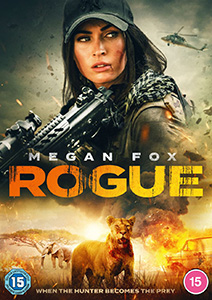 Samantha O’Hara (Megan Fox) leads a squad of soldiers on a mission to rescue a hostage from a group of violent terrorists in the plains of Africa. The mission however does not go as planned, and a frantic retreat from the terrorists leads to vehicular chases, bloody gun battles, and an escape route that nobody really wants to think about but ultimately have to take.

Escaping the terrorists is just the beginning of their problems though, as also roaming the African plains is a ravenous, enraged lioness that is baying for anyones blood after escaping from an illegal lion farm when an unsuccessful attempt to kill her left her wounded and incredibly pissed off.

Will the hostage be saved? Can the terrorists be beaten? Will the lioness get to eat even more people for lunch? All of these questions can be answered by watching Rogue.

First of all, the cgi lioness looks like it is in a video game cutscene and is not convincing as “being there”, which certainly takes away the tension as far as the characters safety goes. However, I embraced this and went along with everything as it unfolded before me, thoroughly enjoying the story in all of its cheesy action filled glory.

The characters and narrative are all by the book, with any so called surprises signposted in advance, and yes I would have preferred to have seen practical blood squibs as opposed to cg ones, but Rogue had that certain something which not only kept my interest, but even stopped me doing the dreaded “looking at the clock to see how long was left”.

The narrative slows in act 2, but is bookended by enough action (and unintentional laughs) that the 105 minute running time never dragged, and it even elicited a couple of audible whoops of delight during some of the lioness attacks.

Rogue plays out exactly how you expect it to, but the journey to its inevitable conclusion is an enjoyable, albeit cheesy, one that had enough thrills and spills in it to keep me happy.

If you enjoy the lower budget end of action movies and embrace cinematic cheese, then Rogue is a tasty morsel that just about passed the taste test for me.

Save 10% at The Bark Side with our exclusive code Review: Ted 1&2