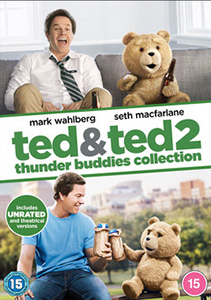 Now I could go through the plot of Ted’s 1 and 2, but hell, if you missed out on these two films on release then you must be living in a cave in Outer Mongolia.

Seth MacFarlane IS Ted; a fluffy teddy bear that is magically brought to life by John (Mark Wahlberg as grown up John). Ted grows into a normal 30 something bloke. A foul mouthed stoner wrapped up in a small cuddly bear. Oh and he hasn’t got a penis.

So this isn’t so much about the plot than rather, does it hold up after 8 years?  Is fucking Tammy Lyn with a parsnip still as funny 8 years later?

Actually just writing that made me laugh.

I do think the Ted’s are more aimed at the ‘male humour demographic’ and some of the script is a little hit and miss, but that’s more personal choice as I don’t find endless stoner jokes funny. I DO however, find fucking your girlfriend with anything remotely like a penis funny, and there are a LOT of penis jokes in these 2 films.

Having watched both films back to back I lost count of the times I hooted, and loved seeing Sam (Flash) Jones take the piss out of himself.

One of the big pluses on this double set is the extras. The commentaries are hilarious and worth the price alone to hear MacFarlene talk about making the films, and his penis.

Review by Tina from discs kindly supplied by Fabulous Films.

I used to live in Los Angeles and write about Rock bands. Now I live in wonderful Wales and write about films. I like video games (especially RDR2) and am also a painter...gratuitous plug: follow my art account on Instagram @artbytinar
Review: Rogue Grimmfest announces Christmas Horror Nights, December 11th-12th