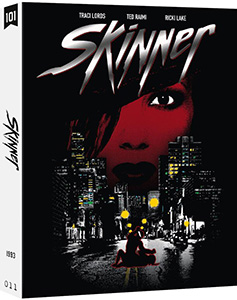 Released for the 1st time in the UK on any format, and at one time thought to be a lost film, Skinner has been restored and presented in this release with a 4k scan and additional extras.

Dennis Skinner (Ted Raimi) rents an apartment in a house owned by Kerry (Ricki Lake) and Geoff (David Warshofsky). Little do his landlords know, Dennis roams the streets at night with a bag full of knives looking for victims to skin.

However, Dennis is also being stalked too, as one of his past victims, a morphine addicted junkie called Heidi (Traci Lords), wants revenge for what he did to her.

Dennis begins to have feelings for Kerry, especially as Geoff is away from home a lot due to his job as a truck driver, but this of course can only lead to complications and a bloody finale.

Ted Raimi, so often outshined and put into small background roles by his brother Sam, excels as an off-kilter character who loves nothing more than wearing the skin of his victims…think Leatherface, but with a higher education and far better vocabulary.

Eschewing the humour which ran throughout a lot of horror films during the 1980’s, Skinner shows its nihilistic 1990’s setting with brooding characters and dark gritty locations.

The practical effects by KNB are fantastic, and once again show that latex and some good old fake blood, can be far more effective than current day CGI.

While not the best horror film that you’ll ever see, it is fantastic that 101 Films have worked so hard on getting it released, and in such a superb package too.

Drop into the dark world of Dennis Skinner and I guarantee you’ll have to give at least one cursory look behind you the next time you’re walking alone at night.