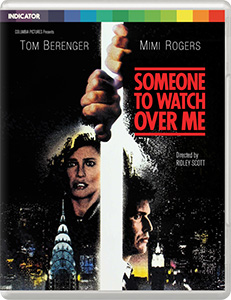 As she totters towards the meeting place in glorious heels and sparkly seamed nylons she witnesses Venza, a gangster(?) murder Winn. She escapes in the lift.

Meanwhile on the other side of the tracks is a raucous party for newly appointed detective Mike Keegan (Tom Berenger). Keegan is assigned to ‘watch over’ Claire as she is the only person who can identify Winn’s killer.

Of course the inevitable happens, Keegan falls for Claire and they begin an affair. However the wonderful Lorraine Bracco who play Ellie, Keegan’s wife, is so beautiful and amazing you spend most of the film wondering what the hell he sees in slightly wet Claire.

This is a pretty run of the mill action/thriller, which even Ridley Scott’s excellence can’t help. Yes we have the amazing sets, the attention to detail, the perfect soundtrack, the camera angles, the 40s noir vibe. It’s all there, but I can’t help thinking the wrong Scott brother directed this film, and if Tony had been let loose on it, it would have been a lot better.

I used to live in Los Angeles and write about Rock bands. Now I live in wonderful Wales and write about films. I like video games (especially RDR2) and am also a painter...gratuitous plug: follow my art account on Instagram @artbytinar
Review: The Virtuoso Rants R Us: Meat & Two Veg