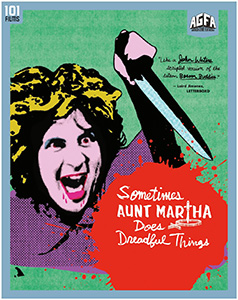 Hiding out in Florida after robbing a bank in Baltimore, cross-dressing Paul assumes the identity of the titular Aunt Martha, while his partner Stanley can’t even be bothered to have his hair cut to try and disguise himself.

Their relationship becomes ever more strained as Paul tries valiantly to keep up the pretence of living as Aunt Martha, despite the intrusion of neighbours across the road, while Stanley tries to deny his sexuality by dating women, but then becoming overwhelmed by a sense of panic and paranoia whenever any of them try to initiate sex with him.

Emotions then escalate to the point where it all gets out of control.

Another AGFA classic from 101 Films had me glued to the screen throughout (even Tina couldn’t take her eyes off it), as this ticked lots of my low budget indie movie boxes.

Abe Zwick as Paul was wonderful, confident in his Aunt Martha persona despite a terrible wig and clearly looking like a man. I was amazed to see that this was his only acting gig as I immediately wanted to watch him in something else. While Wayne Crawford (credited as Scott Lawrence) as Stanley played the annoying partner role perfectly…and went on to have a decent enough acting career.

All the usual low budget indie highlights of bad wigs, nudity and violence are here, complete with the most garishly painted van that Paul and Stanley drive around in…all while trying to stay unnoticed of course.

This is like a demented sitcom with characters popping in and out of the house, all while Paul and Stanley try to keep their true identities concealed from everyone and curbing their psychotic personas so violence doesn’t erupt…which we all know can’t last too long.

Check out the trailer below for a little flavour of what happens when Aunt Martha does dreadful things.