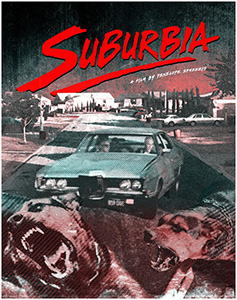 Number 21 of 101 Films ‘Black Label’ series of releases and a fantastic companion piece to number 22; ‘The Boys Next Door‘ (both by director Penelope Spheeris), this hard hitting and intimate portrayal of the Los Angeles punk scene in the early 1980’s stars some real life punks in lead roles, as well as live performances from punk bands D.I.,T.S.O.L. and the Vandals, giving the whole feel of the movie an authenticity that many of the time were missing.

Evan (Bill Coyne) leaves home to escape his alcoholic mother and joins a rag tag collection of youths called ‘The Rejected’ (T.R.). They all live (barely exist?) in a run down area of town in a dilapidated building that is just about still standing…but thankfully still has electricity!

Eventually joined by his younger brother Ethan (Andrew Pece), Evan and the rest of The Rejected are in a constant battle to find food and friendship, made all the more difficult when they become the target of “Citizens Against Crime”: a group of suburbanites who want to rid the area of them and all like them.

Even grittier than the aforementioned ‘The Boys Next Door’, director Penelope Spheeris isn’t afraid to swap professional acting talent for raw punk authenticity. This pays off in attitude and looks, but sometimes comes up short into buying into the characters and their fictional circumstances.

Among the youths is Mike B. The Flea as ‘Razzle’, who is now best known quite simply as ‘Flea’ from the rock band The Red Hot Chilli Peppers. His dead eyed stare and propensity to put a live rat into his mouth helps sell you into the frame of mind that this is not a group you’d particularly want to hang around with.

Given little choice to progress with their lives thanks to unsupportive/alcoholic/violent parents, you’re forced to watch them do anything and everything needed to survive…whether it be on the right or wrong side of the law.

However, in their tunnel vision to rid the area of this so called “disease”, the citizens against crime group fair no better when it comes to obeying the law, resulting in clashes between them whereby there are sometimes no clear victories for either side.

Raw, violent and unsettling, Suburbia gives you a little slice of life that unfortunately is still being played out across the globe where youths are leaving estranged households.

The bonus of the usual great packaging and special features of these Black Label releases means that you should get as many as possible in your collection ASAP.