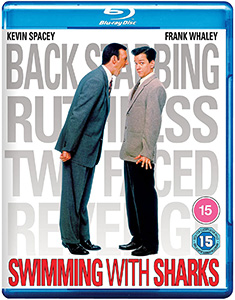 Now, how come I, a really big Woody Allen fan, resolutely refuse to review any of his films, yet can pop a Kevin Spacey film into the dvd player and still feel that this fella is one hell of an actor? No, more…one of the best actors. Why?

Allen is accused of molesting his own daughter (which he denies) and Spacey of molesting a multitude of men, several underage. Allen was investigated and was found to have nothing to answer to, Spacey was arrested and every accusation has dissolved except one, that of actor Anthony Rapp who claims Spacey held him down on a bed and tried to have sex with him when he was 14. Rapp’s case is the only one that’s open.

Spacey has lost his career and is tainted as an abuser. But I feel no qualms about watching him in a film. I wondered if it was a gender thing, male abuse/female abuse? Am I biased? Do I think it’s not so bad for a lad to be abused? No, it’s not that, I think  – and forgive me if this sounds like an excuse – it’s not – it’s the power of his performance that allows me to separate Kevin Spacey the man and possible abuser, from the part he plays. I don’t see Spacey, I see only that character.  One such character is Buddy Ackerman, the film producer in George Huang’s Swimming with Sharks.

Spacey is a powerhouse in this film, and went on over the next few years to make Se7en, The Usual Suspects. LA Confidential and American Beauty.

Swimming with Sharks on this rewatch has lost some of it’s power, mainly because it seems dated because that once secret world of producers fucking, and fucking over, anyone they want because they’re that powerful, was a surprise to the audience, yet here it all is, laid bare in this film made in 1994. That in itself was a shock, its almost like Huang was shouting ‘OI!!! Over here!!’

It tells the story of Guy (Frank Whaley) newly graduated from film school who thinks his new job as an assistant to Buddy will be the making of him.

Unfortunately Buddy is a complete bastard who continually humiliates, and mentally and physically tortures him with great relish. It is in part painful to watch, but you just can NOT take your eyes off Spacey. He is magnificent.

Often sold as a comedy, which I find amazing as seeing someone’s soul ripped out isn’t really that comedic, this is a good film with a neat twist in the end that you don’t see coming. But mainly this film is a reminder of what an amazing actor Spacey is.

I used to live in Los Angeles and write about Rock bands. Now I live in wonderful Wales and write about films. I like video games (especially RDR2) and am also a painter...gratuitous plug: follow my art account on Instagram @artbytinar
Review: The Office (U.S.): The Complete Series May/June 2021 Entertainment Show