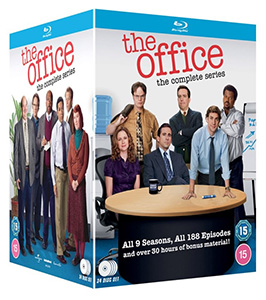 I watched and enjoyed the original UK version of The Office when it first aired in 2001, and have rewatched both series and the Christmas special many times since then.

I didn’t watch the U.S. version until many years after its premiere in 2005 (probably around 2015), as I loved the UK version so much I assumed that I wouldn’t find the U.S. version funny at all.

How wrong I was!

The “cringe making” humour, outrageous storylines, and a complete cast of characters that you fall in love with for many different reasons are all present and correct, and even despite running for a lot longer than the UK’s 2 series, it still lost none of its lustre, with only the occasional dip in laugh inducing moments across its entire 9 series (or ‘seasons’ as they are referred to in America).

This complete series blu-ray box set from Fabulous Films is a must buy for all fans of the show, containing all 9 series, and over 30 hours of bonus material, including 19 hours of deleted scenes, bonus commentaries, webisodes, blooper reels and much more.

The pilot episode is a direct adaptation of the first episode of the UK series, but from then onwards it becomes its own beast, with characters evolving over time and becoming a vital part of the show.

It mirrors its UK inspiration by still being a single camera documentary type show, complete with no audience or laughter track…which further enhances the cringe factor when things ultimately go awry.

Also much like in the UK version, it is set in the titular paper company office, and has a manager whose internal monologue about himself far exceeds his actual capability of doing his job in a competent way.

I thought nobody could make me squirm and laugh at the same time as much as Ricky Gervais as David Brent in the UK version, but Steve Carell as Michael Scott comes damn close on numerous occasions.

Carell and the rest of the cast are all superb, and as usual with a series that runs for so long there are cast changes along the way. Some work well, others not quite so well. But when it all comes together, which it does for the majority of its run, it is comedy gold with an emotional heart that you can’t help but open up to as the intricacies and intimacies of the characters lives begin to unfold before you.

Wacky comedy scenes blend into touching poignant exchanges between characters where tears of laughter can morph into those “I’m just wiping dust from my eyes” moments, then do a quick switch and you’re laughing again as Jim Halpert (John Krasinski) gets the better of Dwight Schrute (Rainn Wilson) once again.

I will admit that by the time it got into its final series I was ready for a finale, but that was mainly due to the writers seemingly running out of ideas of what to do with the characters, not me falling out of love with the characters that I had spent so long with watching their fictional lives.

Having all 9 seasons on blu-ray is an absolute essential for all fans of the show, made even better by the glut of special features which will have you glued to your screens for many hours (and which have the same repeat watch value as the actual show).

Add this to your blu-ray collection and dip into it whenever you want cheering up.

Lawn Mowing Simulator mows its way to PC and Xbox on 10 August Review: Swimming With Sharks