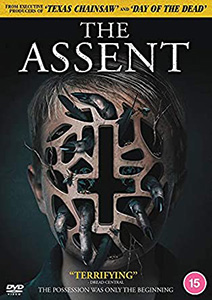 Here at 60MW Towers we tend to, when offered a film for review via streaming services, look at the trailer before confirming. Streaming is problematic living where we do, so on seeing the trailer for The Assent, we both agreed that it looked pretty promising.

Single father Joel (Robert ‘Sean Slater from Eastenders’ Kazinsky) looks after his son and works at a low paid handyman job. Strange ‘supernatural’ things happen in the house which leads to him suspecting his young son may be … possessed.

Alongside this is a fragmented story of a Priest (Father Lambert, acted in the most terrible and hammy way possible by Peter Jason) who has just been released from prison for murdering, or rather performing an unsuccessful exorcism on, a young boy.

What begins as a really promising horror movie soon descends into a ‘seen it all before’ run of the mill, by the numbers possessed kid film. Elevated only by Kazinsky’s superior acting.

I guessed the end way before it happened. It’s a shame because the style of the film, the sets and ‘eeriness’ is really good, it’s just the hammy acting and remaining  story that lets it down.

Worth a watch but unfortunately there is nothing new here.

I used to live in Los Angeles and write about Rock bands. Now I live in wonderful Wales and write about films. I like video games (especially RDR2) and am also a painter...gratuitous plug: follow my art account on Instagram @artbytinar
Soundcheck interview: Kim Simmonds Review: It All Begins with a Song