Review: It All Begins with a Song 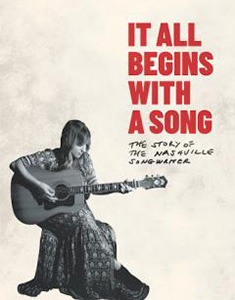 Just as I was about to write a review of this music documentary, I saw its full title online. It All Begins with a Song – the story of the NASHVILLE Songwriter, and I thought OH…. Well…. that’s my review out of the window!

I watched this thinking it was about songwriters in general and my biggest lament was that, not only did I not know any of the talking heads, but I also had NO idea what the songs were (except Don’t Stop Believing).

So with that in mind this is a good documentary, sensitively told and in part it examines a song called I Drive Your Truck sung by Lee Brice and written by Jessi Alexander, Connie Harrington, and Jimmy Yeary (I have never heard of any of these people). Harrington came up with the idea for the song after hearing a man speaking on the radio after losing his son, Jared, in Afghanistan, and he started driving Jared’s truck to help ease his grief. Alexander, Harrington, and Yeary then turned this into a song, and as the penultimate finish to the documentary went to the man’s house to sing it for him.

I don’t think they gave him any of the royalties though.

So if you are a fan of modern country this would be a truly fantastic film for you to watch. However, for someone like me, not so much. I don’t dislike C&W, but not knowing any of the songs led to me not really being invested in what the heads were discussing.

Review by Tina from a streaming link kindly supplied by Tricoast Worldwide.

I used to live in Los Angeles and write about Rock bands. Now I live in wonderful Wales and write about films. I like video games (especially RDR2) and am also a painter...gratuitous plug: follow my art account on Instagram @artbytinar
Review: The Assent Review: Open 24 Hours