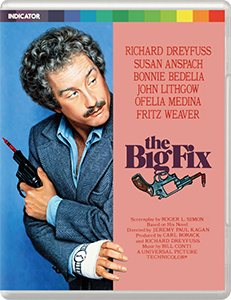 Directed by Jeremy Kagan and based on the novel by Roger Simon (who also did the screen writing), it stars Richard Dreyfuss as ‘Quirky’ (oh there’s that word again) private detective Moses Wine (there’s a lot of Jewish jokes in this film) who was once a radical, Vietnam war hating student, but has now grown into a private investigator.

He is contacted by Lila (Susan Anspach), his girlfriend from his college days, who’s working in the election campaign for Miles Hawthorne, a politician who is running to be Governor of California. She’s concerned about a fake campaign flyer supposedly showing former infamous college radical, and now disappeared Howard Eppis who was one of the ‘gang of four’ who were arrested for terrorism together with Hawthorne and endorsing him.

Knowing that Moses was friends with Eppis in college, Lila and her boss Sam (John Lithgow) hires him to find out if Eppis is behind it.

As you can see, it’s already complicated, and as more characters appear, I started to grow a little weary of the quirkiness and my attention lapsed making me wonder who some of the people were.

It’s entertaining enough, but Richard Dreyfuss tended to play the exact same role during this period (Jewish, quirky, short) so you sort of know what you’re going to get. Dragging his kids with him everywhere as his wife ‘finds herself’, Dreyfuss bounces from situation to situation always retaining his …quirkiness.

I used to live in Los Angeles and write about Rock bands. Now I live in wonderful Wales and write about films. I like video games (especially RDR2) and am also a painter...gratuitous plug: follow my art account on Instagram @artbytinar
Review: Evercade Namco Museum Collection 1 Born To Be Bad 1&2