Review: The Boy Behind the Door 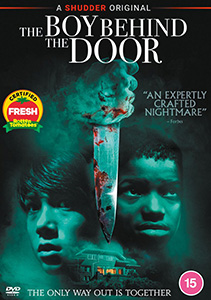 The feature film debut from writing-directing duo David Charbonier and Justin Powell, The Boy Behind the Door has twelve-year-old Bobby (Lonnie Chavis) and best friend, Kevin (Ezra Dewey) trapped in a dark and mysterious house in the middle of nowhere after being abducted while out enjoying themselves.

Bobby escapes from the boot (“trunk” for our American friends) of the car, but when sneaking into the house discovers that Kevin has had a far harder time of it so far, and so keeping to their pledge of never leaving each other behind, he attempts to free Kevin, all while trying to avoid the mysterious abductor and their acquaintance.

Filmed from the perspective of the 2 young boys, The Boy Behind the Door has some genuinely tense moments, and you can’t help but root for the kids, especially for Bobby who has the majority of the screen time and showcases a great performance by Chavis (Dewey and the rest of the cast are very good too).

As is usually the case in movies like this, the protagonist falls into the usual trope of having the antagonist in a vulnerable situation and then deciding to run away (usually leaving the only weapon they had behind them), instead of finishing them off for good…or at the very least delivering a few more painful blows. This however didn’t spoil the movie for me (just made me swear at the screen a couple of times) and I was invested in the kids situation right through until the end.

A reveal that I guess was intended to be a surprise I had worked out much earlier, but it still added a little extra flavour to the proceedings, and while the violence is minimal (this focus more on prolonged tension), when it does happen it is effective.

A taught thriller best watched at night in the dark.

On Blu-ray, DVD and Digital 2nd May from Acorn Media International.