Review: The Colossus of New York 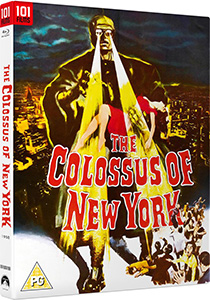 Jeremy Spensser (John Baragrey) is an esteemed humanitarian who has just won the Nobel Peace Prize. Happy and content with his work and his family life with his wife and son, everything is shattered into pieces when he is killed in a freak accident while trying to retrieve his sons model airplane.

Luckily (or not, seeing how the narrative progresses) for him, his father is a brilliant brain surgeon and transplants Jeremey’s brain into the body of a robotic colossus…that can fire deadly rays from its eyes.

When gaining consciousness, Jeremy fights to keep control over his thought patterns, and only the intervention of his family can stop the impending rampage on the citizens of New York.

I love 50’s sci-fi movies, and while The Colossus of New York isn’t up there with the very best of them, it’s different take on the genre has enough going for it to warrant repeat viewings…especially on this great Blu-ray release from 101 Films.

While the title may well suggest a HUGE creature laying waste to most of the ‘Big Apple’, in reality the ‘colossus’ is no bigger than an average basketball player, and the majority of the ‘action’ takes place in a quaint country estate garden.

Low on action, but high on thought provoking moments, The Colossus of New York poses existential questions about a humans ‘soul’ and if the brain really is the centre of a persons ‘being’.

No flying saucers and no wacky aliens, but more than making up for that with characters that you care about and some genuinely touching moments between a father and his son.

A great commentary with film historians Allan Bryce and Richard Holliss add to the value of an already worthy purchase.

ABC of gaming: July 2019 Review: Crack in the World