Review: The Dark and the Wicked 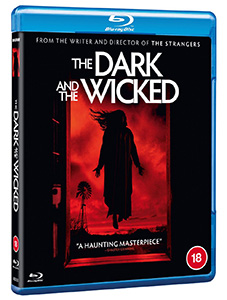 I’ll begin by saying that The Dark and the Wicked is my favourite horror movie of the year so far, and one which I shall be revisiting again before too long…something I don’t say lightly as someone who watches 500+ films a year.

Deterred from visiting the farmhouse by their mother (Julie Oliver-Touchstone), they both ignore her warnings not to come and are determined to be there to comfort her and say a last goodbye to their dad.

It soon becomes apparent though that they should have heeded their mother’s warnings to stay away, as a series of events begin to unravel from which there is seemingly no escape.

I went into The Dark and the Wicked knowing nothing about it at all, and so should you, hence why I’m going to give nothing else away about what happens.

What I will say though is that if you want a well crafted, slow paced, creepy and atmospheric horror movie, that both looks and sounds great and with superb performances by all involved, then this is the movie for you.

Shocking and bloody moments of gore are interspersed with scenes of genuine tension, where the merest movement in the shadows or a creaking sound from just off screen is enough to raise the hairs on the back of your neck (I have never seen Tina hide her face behind her hands while watching a movie before!).

The ending didn’t quite hit in the way that I would have liked, but everything that went before it ticked all the boxes for what I love about horror movies.

Turn out the lights, turn up the sound, and don’t glance into the shadows in the corner of your room while watching.