Review: The Day of the Dolphin 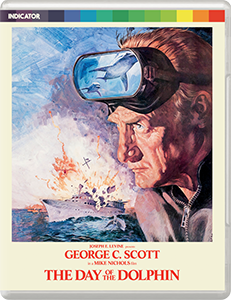 “Unwittingly, he trained a dolphin to kill the President of the United States”

The above is the tag line for The Day of the Dolphin, and surely you don’t need to know anymore before wanting to purchase…I certainly wouldn’t!

However, for anyone that may still be deciding, here’s some more info…

Starring George C. Scott as reclusive marine biologist Jake Terrell, The Day of the Dolphin is adapted from Robert Merle’s best-selling novel and directed by Mike Nichols (The Graduate, Catch-22).

Terrell and his team are located on a remote island in the Bahamas and after 4 years of training have taught a dolphin named ‘Alpha’ (‘Pha’ for short) to understand and speak rudimentary English.

Let’s just pause once again for a moment. You’ve already seen the tag line, and now you know this stars a dolphin which can also understand and speak our language…is your order placed yet?

Unwittingly, Terrell and his superior are coerced into letting a stranger who claims to be a writer into the facility. This stranger is of course treated with extreme caution, but through a series of events out of Terrell’s control, Alpha (along with his new female partner Beta) are suddenly involved in a plan to assassinate the President of the United States.

To give away any more would spoil what is an outrageous narrative that should be experienced with as little pre-knowledge as possible.

What is worth knowing in advance though is that a lot of the scenes involving the dolphins can be distressing to watch.

Stored in small tanks, often moved around via transportation ‘hammocks’, and made to do tricks on command, these beautiful creatures are certainly a long way from their natural environment.

The human actors all play their parts well though, with George C. Scott being the star (as he so often is), even drawing you into emotional scenes where he is having a conversation with a dolphin! “Pa loves Pha”

Once again Powerhouse Films release a film that was new to me, yet also enthralled me…despite a few niggles about the dolphin scenes.

The special features on the disc flesh out a lot of the back story and on set happenings, while a 36 page booklet makes fascinating reading.

If you’ve ever wanted to see George C. Scott have a chat with a dolphin that’s going to attempt an assassination of the President of America, well your wait is now over.