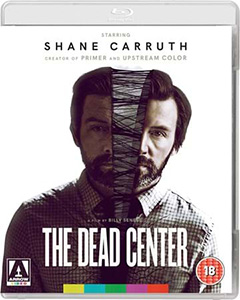 When Michael (Jeremy Childs) is brought into a morgue after committing suicide, everything seems normal. This soon changes when he gets up and leaves the morgue with no memory of who he is.

When Michael is brought into the emergency psych ward of a hospital, troubled psychiatrist Daniel (Shane Carruth) takes him under his care and vows to find out not only who he is, but also what has happened to change his mental state.

Little does Daniel know that there is far more to his new patient than meets the eye, and when a series of killings begins to happen in the hospital, all evidence points towards it being Michael.

But, Michael is not always in control of his actions, and an evil force threatens to devour all that gets in its way.

The Dead Center is a low budget movie which keeps its locations and action to a minimum, but keeps the slowly unfurling narrative interesting by regularly dropping subtle hints about evil forces and possession, before finally revealing what is at the (dark) heart of it all.

Taking time to develop the characters and learn more about their backstory gives more emotional impact whenever events turn towards the dark side of life, specifically with Daniel, a man who should be at the top of his game, but who is a man with a troubled past that still haunts him to this day.

Creepy, unsettling, and with a final act that could well have you squeezing the arms of your couch just that little bit too hard, The Dead Center is a low budget chiller that raised the hairs on my neck on more than one occasion.

A wealth of special features fleshes out everything you would ever want to know about the movie, including its genesis as a short film.

With Halloween just around the corner, this is the perfect time to indulge yourself in new horror movies.

Live Event: We Are Inglorious, The Tivoli, October 24th, 2019 Review: The Eiger Sanction