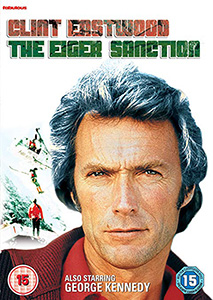 Retired assassin Jonathan Hemlock (Clint Eastwood) now works as an art professor, while also indulging his love of art by always wanting to add to his extensive collection of paintings.

When an old friend of Jonathans is murdered, he comes out of retirement and must join a group of mountain climbers who are about to ascend the Eiger. One of the climbers is the person Jonathan must ‘sanction’ (assassinate), but which of them is it?

Directed and starring Clint Eastwood, The Eiger Sanction is a great action thriller with stunning cinematography, specifically the shots on the mountain, where Eastwood also did a lot of his own stunts.

Made at a time when Eastwood was flipping between either playing a cowboy or Dirty Harry, The Eiger Sanction is often overlooked in his oeuvre, yet it contains some classic Clint moments and holds its own against the rest of his output during the 1970’s.

Todays audience may well get their finely preened feathers ruffled with some of the politically incorrect themes and langue used in the film, specifically its depiction of homosexuals and females, but it is to be noted that The Eiger Sanction can be viewed as a satire of the times and not to be taken too seriously.

Eastwood is his usual cool and collected self, which has endeared him to audiences worldwide for six decades now, and the supporting cast are all excellent, especially George Kennedy as Jonathans longtime friend Ben, and also Jack Cassidy as the overtly gay Miles Mellough who owns a dog called ‘faggot’!

Tightly directed as always by Eastwood, the narrative keeps you guessing as to who the target might be, while also keeping you highly entertained with tongue in cheek dialogue and some gripping (no pun intended) mountain climbing scenes.

An Eastwood classic that should be in everyones collection.