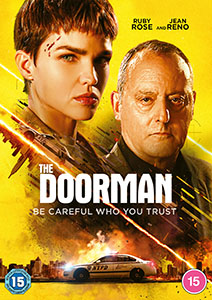 Given a job as the doorman at a hotel that is undergoing renovations and only has minimal occupants, Ali thinks that her problems are now behind her, though she is still suffering from PTSD.

Unknown to her, expensive pieces of art have been stashed at the hotel and a group of criminals lead by Victor Dubois (Jean Reno) will stop at nothing to get their hands on them.

Ali soon finds herself as the only person who can stop them.

While playing out like another low budget “Die Hard in a…”, The Doorman had enough going for it that it kept me entertained throughout, despite a relatively emotionless performance from Ruby Rose…though she certainly comes alive when it comes to kicking some bad guys ass.

Yes the characters are clichéd, yes the plot is predictable, yes the ideas are bigger than the budget can possibly deliver, but it had enough going for it that not once did I glance at the clock to see how long was still to go…a sure sign that I’m getting bored if I start clock watching.

The action sequences were inventive at times, and the final fight culminated in an 80’s inspired moment that had me shouting “YES!”…then immediately rewinding to watch it again.

Low budget direct to DVD action movies can often be a painful watch, but thankfully the only pain in The Doorman is that dished out by Ali as she kicks, hits and shoots a succession of bad guys who think they can take her on.

If you like the lower budget end of action cinema then definitely give this a try.

The Doorman is available on Digital Download 18 January and DVD 25 January 2021 from Lionsgate UK.