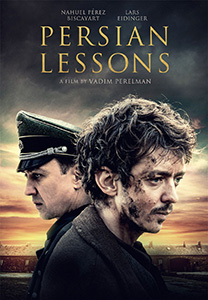 It is the middle of WWII and Giles (Nahuel Pérez Biscayart), a young Belgian man, is arrested by the SS alongside other Jews.

While on a transportation lorry surrounded by fellow prisoners, he is offered a book in return for a sandwich that he is carrying. This book will be the key to saving him from being executed by a Nazi firing squad, as, falsely claiming that he is not Jewish and is indeed a Persian, he shows the book, complete with Persian inscription, to the Nazi soldiers.

In a fortuitous series of events, the concentration camp Captain is wanting somebody to teach him Persian in preparation of visiting his brother in Tehran, so Giles is sent before him and is tasked with teaching the Captain a language that neither have any knowledge about.

So begins a tense series of events whereby Giles must keep up the legitimate pretence of being fluent in Persian, which leads him to making up his own language.

Now just think about that for a moment…you not only have to make up words on the spot, but you also have to memorise their meaning too, as the camp Captain is writing every word down and you have no access to pencil or paper! And just for good measure, the Captain sets a target of learning thousands of words…eeek!

I loved the premise of Persian Lessons, and thanks to a great performance by Nahuel Pérez Biscayart as Giles it kept me captivated throughout, all climaxing in a very satisfying ending.

The tension throughout its entire running time is palpable, with no action and very little comedic moments to break an atmosphere which very often has you holding your breath as Giles deception comes perilously close to being discovered.

Playing opposite Nahuel Pérez Biscayart is Lars Eidinger as Captain Klaus Koch, and it is the performances of both actors which carry the film and keep you hooked on every exchange that they have, with Koch slowly warming to the man whom he thinks is helping him to achieve his goal of speaking Persian.

Persian Lessons is an intriguing twist within the war movie genre, with large battles and intense bloodshed being replaced by verbal battles and emotional sparring that will keep you connected to the characters until the gratifying climax.

Review by Dave from a disc kindly supplied by Signature Entertainment via Witchfinder PR.