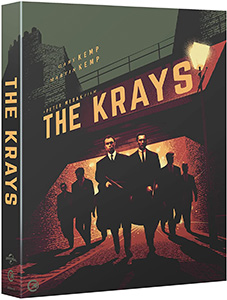 I remember when The Krays was released (31 years ago!) and there was some media furore about its violent content. Viewed all these years later it is not as hard hitting as once perceived, but still contains some visceral shocks that can make you wince.

Second Sight Films once again do an exemplary job of bringing together all the ingredients of a superb physical disc release; with beautiful packaging and artwork, great picture and sound transfers, interesting and informative special features, along with bonus extras which include a soft cover book with new essays by Andrew Graves, Neil Mitchell and Shelagh Rowan-Legg, and 6 collectors’ art cards.

Telling the story of real life gangster brothers Ronnie and Reggie Kray from their birth in 1933, through to their incarceration in 1969 (with a brief pre-credits scene showing them as older men), this Peter Medak helmed film stars brothers Martin and Gary Kemp (of Spandau Ballet fame) in the lead roles.

The films budget does occasionally hamper its vision, and some of the acting is a little on the ‘hammy’ side (with one particular overacted death scene eliciting laughs from me instead of sympathy), but as a whole it does a good job of portraying the gritty underground gangster world of London, with the highlight for me being a film stealing performance by Steven Berkoff, who chews up the scenery whenever he appears onscreen.

While a lot of the brothers more infamous moments are shown, there is also a lot left offscreen, though there is only so much you can fit into a running time which clocks in at just under 2 hours.

It doesn’t seem like a 2 hour film though, and a constant stream of interesting onscreen events kept me once again engaged throughout.

Whether you’re a viewer back from its original release or never seen it before, Second Sight films once again releases a definitive version to buy and add to your collection.

Review by Dave from a disc kindly supplied by Second Sight Films via Aim Publicity.