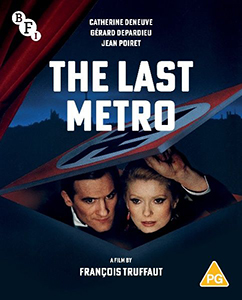 The Last Metro, made in 1980, written and directed by François Truffaut, and starring Catherine Deneuve and Gérard Depardieu and winning nearly every award going, is a classic of cinema that passed me by.

It follows the actors and workers of a theatre in Montmartre during the Nazi occupation of Paris in 1942, though the eyes of these people.

Depardieu plays Bernard Granger; a young actor who’s trying very hard to seduce the production designer Arlette, who unknown to him, is a lesbian.

Deneuve plays former movie starlet Marion, leading lady and owner of the theatre after her Jewish husband Lucas flees the country. When he actually is living in the basement listening to everything through the pipes. Every night when the play is finished they eat and roam around inside talking of his escape.

The theatre critic Daxiat is an anti-Semite Nazi sympathiser, who may fancy Marion and seems to know something untoward is going on, and hatches a plan to take over her theatre.

Despite its Nazi-occupied content, there is no real ‘the horror of war’ in this, rather a sort of mini soap opera about hiding husbands and lesbian kisses with some blatant Jew discrimination thrown in. Perhaps the most surprising thing about the story is Marion declaring her love for Bernard near the end, which I found rather puzzling as there is hardly any interaction between them except when they rehearse or act in the play.

Interestingly this film was meant to be just one instalment about theatre, of a trilogy on the entertainment world planned by Truffaut. The film world project was 1973’s Day for Night, and third which Truffaut completed the screenplay for was to be L’Agence Magique, which was about the world of music hall, but it was never made.

A recurring theme in Truffaut’s films is film itself, either watching them or making them, and The Last Metro’s (where Parisians ran to catch the last metro or be arrested because of a curfew) opening mixes documentary footage with period re-creations alongside shots of contemporary film posters.

I have to admit I was quite disappointed by the story, with such a stellar cast and director, and amazing reviews I expected something ….more, and although it’s not what you’d call a boring film, I certainly wouldn’t class it as an unmissable classic of modern cinema.

I used to live in Los Angeles and write about Rock bands. Now I live in wonderful Wales and write about films. I like video games (especially RDR2) and am also a painter...gratuitous plug: follow my art account on Instagram @artbytinar
The Trophy Achievers: May 2022 Live Event: Hardline, The Tivoli, May 27th, 2022