Review: The Life of Rock with Brian Pern 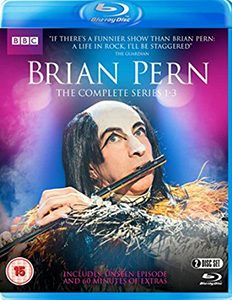 I will always be eternally grateful to Brian Pern for discovering Kate Bush. Written by BAFTA nominated and Emmy Award winning director/writer Rhys Thomas and The Fast Show’s Simon Day, ‘The Life of Rock with Brian Pern’ follows the ‘story’ of the eponymous singer/songwriter/Rock God, his band THOTCH and associated muscians, TV personalities and the odd gorilla.

You know when you find a real gem of a TV programme you love so much you are desperate to get your mates to watch it because you don’t want them to miss out, along with Raised by Wolves Brian Pern is my number one comedy that none of my friends have watched (obviously I’m not mixing with the right people).

Chock full of UK talent (Al Murray, Roger Taylor, Rick Wakeman,  Phil Collins, Roger Moore, John Humphrys, Jools Holland and MANY more) this is truly hilarious stuff, Pern is a mash-up of Peter Gabriel, Phil Collins and a total cunt. Superbly supported by Michael Kitchen as the bands realistic, acerbically glorious manager and Nigel Havers as the pretty member of Thotch. Add Paul Whitehouse and the brilliantly funny (why isn’t she in more stuff?) Lucy Montgomery to the mix and what you end up with is the BEST (and I include This Is Spinal Tap AND Bad News in this) piss-take on fatuous, rich musicians who had privileged childhoods and make shite music ever.

Just go and buy this 3 disc set, if you don’t laugh at Pepita the Mexican Kate Bush cleaning his toilet, you have no soul. Excellent stuff.

Review by Tina (co-host of 60 Minutes With) from discs kindly supplied by Aim Publicity.

I used to live in Los Angeles and write about Rock bands. Now I live in wonderful Wales and write about films. I like video games (especially RDR2) and am also a painter...gratuitous plug: follow my art account on Instagram @artbytinar
Live Event: Hard Rock Hell United (Podcast Pt2) Review: The Hunted