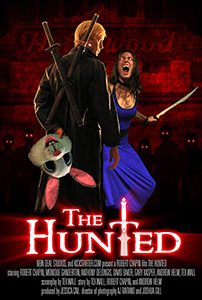 Created by Robert Chapin, The Hunted began life in 2001 as an online web series and continues to this day, making it one of, if not THE, longest running online series. It has built an international audience and is fuelled by user generated content which gives each episode its own identity, while at the same time keeping to the mythology of the world that has already been established…people being bitten by vampires (but not turning into one), becoming a slayer and then hunting the vamps. Now immune to the usual ways of being killed, they must be slayed with a sword, which naturally leads to a lot of blood spraying around the place.

Supported by a Kickstarter campaign in 2011, The Hunted feature film went into production the following year and post-production was completed in 2015. Now streaming on Vimeo on demand for either rental or purchase (I bought it on its day of release) the movie is available worldwide for all to watch.

We meet Bob (Robert Chapin) walking the streets of Hollywood dressed as a chicken and a long way from his days starring in 80’s looking cheesefest ‘Vampslayer’ (of which you’ll see clips throughout The Hunted) and after being bitten by Susan (Monique Ganderton) Bob is surprised (and very happy) to find that he now has strength and abilities far beyond what he could imagine. Due to his role in ‘Vampslayer’, he is deemed ‘The Chosen One’ and his new found powers now confirm that he is the one to lead the battle against the vampires.

The drinking game for this movie is to have a shot whenever the line ‘The Chosen One’ is spoken. I guarantee you won’t get to the end of the movie but you’ll have a great time until you pass out…not as you need alcohol to enjoy The Hunted.

Robert’s experience as a stuntman (particularly sword fights) and his friends in the stunt business that appear in the movie make for some exciting and well choreographed sword and fist fights. His SFX work is also utilised in some great visual effects…my favourite one being where Bob thinks he can fly. I laugh out loud every time I watch that scene…especially the run afterwards too.

Robert plays the part of Bob superbly; an unlikely hero who is suddenly thrown into circumstances beyond his control and he is supported by a great cast; Gary Kasper (as Dragos) is a formidable bad guy who I certainly wouldn’t want to cross (no vampire pun intended!)

The movie is fast paced and doesn’t drag, yet at the same time allows enough characterisation that you genuinely care for the fate of each person. The script is witty and raised plenty of laughs throughout; in one scene the slayers are being pursued by vampires and lay down some C4 (in the shape of a crucifix) in which a handful of pencils are stuck into the top of it accompanied by the line’ it’s all about the shrapnel’…a very nice touch.

As an indie movie the budget is of course not huge, so if you are the type of movie watcher who insists on Oscar winning acting throughout, worldwide locations and visual effects to rival those seen in Avengers: Age of Ultron, Star Wars: The Force Awakens and Armageddon (all movies that Robert Chapin worked on the effects for by the way) then you may well sit there picking holes. For the rest of us however, this is a highly enjoyable action/vampire movie that will raise smiles and have you cheering for the good guys.

Support indie filmmaking and either rent or buy The Hunted asap, you won’t be disappointed.