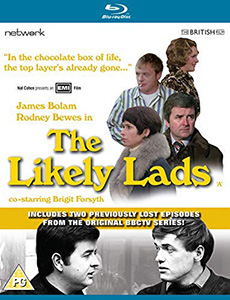 Continuing the story of Bob Ferris (Rodney Bewes) and Terry Collier (James Bolam), which began in 1964 with the television series of the same name, The Likely Lads movie makes its first appearance on Blu-ray courtesy of Network.

Bob’s wife Thelma (Brigit Forsyth) still has no time at all for Bob’s longtime friend Terry, but when she hears that Terry has now got a girlfriend, she plots to get them married as soon as possible with the hope that he would then be out of Bob’s life.

Her plan of them all touring the north of England in a caravan does not go how she envisioned, and in a series of mixups, Bob and Terry are once again alone together to get up to some mischief.

The Likely Lads is yet another 1970’s British sitcom that was made into a movie (see also Man About The House), and while all struggle to keep up the constant laughs from their original 30 minute time span on TV, The Likely Lads raise both laughs and empathy for the characters thanks to the foundation of them created by writers and creators Dick Clement and Ian La Frenais.

Not only a time capsule of 1970’s British humour, it is also great to see the cars, fashions and Northern landscapes of the time too.

This release is also complemented by the addition of 2 previously lost episodes of the original run of the show. Of the 21 episodes from the 3 original series, only 8 episodes were known to exist prior to 2016, at which point 2 episodes were found on 16mm telerecording from a private collection. These two ‘lost’ episodes ‘A Star is Born’ and ‘Far Away Places’ are presented here for the first time in over 50 years since they were last seen in the series final repeat run in 1967.

The Likely Lads is classic British comedy and the movie looks better than it’s ever done. Add on the fact that there are also 2 episodes which have been lost for over 50 years until now, and you have a disc that is a must buy for all fans of the show, and also a great way to get another generation introduced to Bob and Terry.

You can buy The Likely Lads by clicking HERE. ALL money raised by purchasing from Amazon via our website is given back to our listeners and followers in upcoming competition prizes. The more people buy, the bigger our prizes.

Review by Dave (host of 60 Minutes With) from a disc kindly supplied by Network on Air via Blue Dolphin PR.