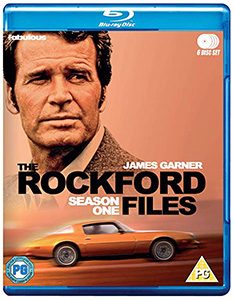 Another great television show from Fabulous Films sees season 1 of The Rockford Files looking as good as it’s ever done on this fantastic 6 disc Blu-ray release.

First aired in 1974, season 1 takes no time in introducing us to Jim Rockford (James Garner), an ex-convict turned private investigator whose easy-going manner belies his true conviction to the cases that he takes under his wing.

In an age where Nordic noir is seemingly dominating television based detective shows, The Rockford Files is a refreshingly relaxed and humorous look back at a different age where having a shot of liquor, going fishing, and occasionally shagging the main female actress in the episode were an integral part of solving the case.

James Garner oozes charm as the good-natured Jim Rockford; a man who doesn’t rely on a gun or his fists to get the upper hand, but would rather use his wits and intuition…though these often get him into just as much trouble.

Season 1 sets up all of the regular characters perfectly and you have an instant affinity for all of them, while the 25 episodes (2 of them two-part stories) also involve guest appearances from the likes of Lyndsay Wagner, Susan Strasberg, Sharon Gless, Paul Michael Glaser, and many more, who all elicit an always enjoyable “look it’s so-and-so” whenever they appear onscreen.

It is Garner however who carries the show. His undeniable charm having you rooting for him through all of the insurance scams, missing people, murders and mobsters whose cases he has to solve at his usual rate of $200 a day…plus expenses.

With so many detective shows made (and continuing to be made), if you didn’t grow up watching The Rockford Files it could well be a show that has completely passed you by.

However, thanks to this great release from Fabulous Films you can now settle back with a television classic that deserves even more love than it already has.

Make sure to listen closely to Jim’s answerphone message each episode too!

You can buy The Rockford Files (Season 1) by clicking HERE. ALL money raised by purchasing from Amazon via our website is given back to our listeners and followers in upcoming competition prizes. The more people buy, the bigger our prizes.

Review by Dave (host of 60 Minutes With) from discs kindly supplied by Fabulous Films.