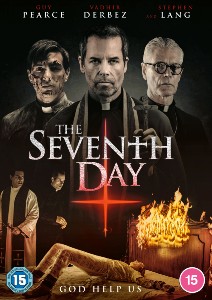 I like Guy Pearce, when I see he’s in a movie I automatically think it’s going to be at least interesting, if not good. However, it seems that Guy’s armour has a chink in it and the last few films he’s been in have been clangers despite his talents.

The Seventh Day tells the age old, done a million times, story of exorcism performed by priests for the Catholic church, after all, Catholic’s and horror go hand in hand.

It’s evident that director Justin P. Lange has been heavily influenced by The Exorcist, The Omen, and just about any film that has Catholic priests and possessed people in.

It has all the old favourites in it; creepy old demon women, possessed kids on the verge of death, gruff Priests (Stephen Lang), a Ouija board and a new unsure priestly convert to the sacred rite (Vadhir Derbez).

I guessed the twist way before the end which left me wanting to skip through the rest of the film to find any gory bits, and there weren’t any.

A very run-of-the-mill film which we’ve all seen before.

I used to live in Los Angeles and write about Rock bands. Now I live in wonderful Wales and write about films. I like video games (especially RDR2) and am also a painter...gratuitous plug: follow my art account on Instagram @artbytinar
Review: Austin Powers – International Man of Mystery THUNDERMOTHER release 2CD Heat Wave ‘Deluxe Edition’ on 21st May