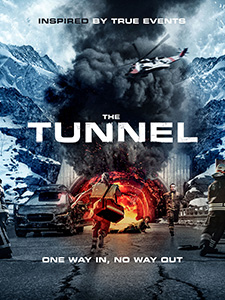 The Tunnel (or in its native language – Tunnelen) is another Norwegian disaster movie. “Oh” I hear you say “Another one”? Yes it seems a to be a ‘thing’ on Amazon Prime in the UK, hidden in the depths of its terrible GUI are some gems, a few of which Dave has discussed on the podcast, namely The Wave and The Quake.

The Tunnel is similar in tone; a slow burn where you get to know all the characters, even the peripheral ones, in depth before the action starts.

This does what it says on the tin. It’s about people getting trapped a tunnel, but before Sly Stallone passes before your eyes, this a lot more realistic and brutal than Daylight. It’s also not very Hollywood.

The effects are ropey at times, but it really doesn’t matter because seeing a truck explode in the middle of a 4 mile long mountain with no-escape tunnel, creating a fireball that will no doubt incinerate most of the cast, a cast that you sort of know, makes the tension in the film palpable.

Yes there’s an annoying daughter and a grumpy hero dad, it’s got all the usual ‘disaster’ tropes, but what Norway seem to do well is, make it watchable and enjoyable, with characters that you connect with.

The Tunnel is released on Digital HD 21st September 2020.

Review by Tina from an online screening link kindly supplied by Signature Entertainment.

I used to live in Los Angeles and write about Rock bands. Now I live in wonderful Wales and write about films. I like video games (especially RDR2) and am also a painter...gratuitous plug: follow my art account on Instagram @artbytinar
Smoove & Turrell – Do It (Ray Mang Remixes) Review: BPM:Bullets Per Minute