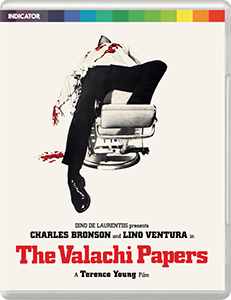 Starring Charles Bronson (as Valachi) and directed by Terence Young, The Valachi Papers tells the true story of Joseph Valachi; a bag man for the New York Mob who first made the term “Cosa Nostra” known.

In the early 1960s he testified to court that there was such a thing as a mafia in America after being given the ‘kiss of death’ by his mob boss in prison. Valachi is taken into FBI custody to give up names and deeds of mob bosses, and in return he’s kept in solitary. The story is told mostly in flashback (older Bronson with grey hair/younger Bronson with black hair).

Now Charles Bronson was never really what I’d call an ‘actor’, to me he’s more of a hard-man action star. So apart from the odd shooting, Bronson does show his acting chops in this film. He’s not miscast, but… he isn’t quite ‘right’. If the film was remade now they’d have Leonardo Di Caprio playing him.

The main problem with it apart from many of the actors are obviously dubbed (because they’re speaking Italian, though you can watch this version in either English or Italian) is that it’s a bit boring. I found myself wishing something would happen as it just sort of drones on.

It was made around the same time as The Godfather and the comparison is glaring right down to a fish being placed on a dead mobster. Perhaps it’s saving grace is the extras on this package. Its interesting to see the real Valachi in court.

I used to live in Los Angeles and write about Rock bands. Now I live in wonderful Wales and write about films. I like video games (especially RDR2) and am also a painter...gratuitous plug: follow my art account on Instagram @artbytinar
GRAHAM BONNET : new Brazilian heavy metal project Review: Oldboy (UHD Blu-ray)