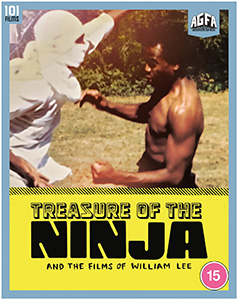 101 Films AGFA range of releases once again delivers a low budget unforgettable viewing experience that would otherwise have passed me by.

Until watching Treasure of the Ninja I thought I was familiar with all the action heroes of the 1980’s. However, filmmaker and martial artist William Lee had somehow slipped through my cinematic viewing net…until now.

Lee wrote, produced, directed and starred in dozens of D.I.Y. action epics which were all shot on Super 8 in Ohio and New York City, and it’s fantastic that a collection of his early work is now available for all to watch.

Treasure of the Ninja’s narrative can be condensed into: high kicks, slo-mo punches, incredible (and totally mis-matched) vocal dubbing, home made sound effects, a helicopter “whooshing” sound that keeps playing in the most bizarre places, excessive narration, and…zombie ninja’s. I really don’t need to add anything else.

If all of the above tickles your low budget indie film fancy, then Treasure of the Ninja will give it a good old Super 8 scratch.

The picture transfers are damn good considering the original source, while the bonus films and commentary track on this release all add extra value.

If my reviews of 101 Films previous AGFA releases have led you to buy and enjoy them, then this is definitely another to add to your collection. As always though, if your main cinematic viewing sticks to the latest multi-million multi-screen blockbuster, then this might not be for you.

• Bonus movie: DRAGON VS. NINJA (1984), previously unreleased and transferred in 2K from the original Super 8 elements