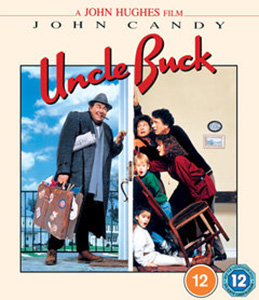 The Middle class, affluent Bob & Cindy Russell (Garret Brown & Elaine Bromka) along with their three kids: 15 year old and angry with her parents for uprooting her from her friends Tia (Jean Louisa Kelly), 8 year old Miles (Macaulay Culkin), and 6 year old Maisy, have recently moved to Chicago because of Bob’s promotion.

Late one night Cindy gets a call saying her dad is ill and she needs to take care of him. Having no one to leave the kids with, Bob suggests his ner’do well brother Buck (John Candy).

Now this film has been around forever and is one of John Hughes more ‘commercial’ films. It’s been some years since I’ve seen it and wondered if I’d enjoy it as much as I thought I had way back in 1989. Films you once loved can bite you on the arse on a rewatch year later, and John Hughes although hugely popular, can also be incredibly schmaltzy and overly ‘American feel good’.

However I am delighted to say that despite a little of that treacle being present Uncle Buck is a joy, it holds up so well and is…funny.

This IS a feel good film, a funny, family, feel good film that owes everything to the wonderful and missed John Candy, who even playing a dick, is just so loveable, kind, sweet and talented. He just shines in this film.

I used to live in Los Angeles and write about Rock bands. Now I live in wonderful Wales and write about films. I like video games (especially RDR2) and am also a painter...gratuitous plug: follow my art account on Instagram @artbytinar
ASHENMOON release new EP Umbra I on 16th Oct Review: Eve