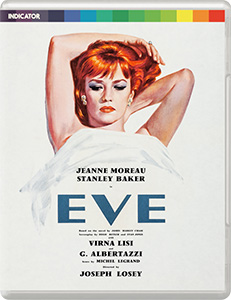 Joseph Losey made some of the most interesting films of the 60s (The Servant…if you haven’t seen this film go out and buy it immediately, The Go Between, Criminal, Mr Klein) after being forced out of Hollywood.

Although I’ve seen the famous cover of Jeanne Moreau as Eve/Eva, I’d never seen this film before this new Indicator release (which includes all versions of the film). Losey obviously thought he was adding to the array of 60s euro art films. However, this is (forgive me Joseph) so self-indulgent I found myself actually getting a bit cross watching it.

Stanley Baker (who was a Losey regular) plays Welsh writer Tyvian Jones who seems to have it all, a popular book (his brother wrote it), a smash hit film based on that book, a beautiful fiancee (Virna Lisi looking amazing), money, a beautiful house near Venice, yet he’s a total macho dick.

He comes across Jeanne Moreau (who was at the time the queen of French art house) and instantly falls in lust with her. Stanley was normally the ‘tough guy’ in films, a man’s man. Macho, hard. Here he looks as if he is literally going to EAT Jeanne he wants her so bad. But WHY does he want her? She appears unhinged, childlike, vindictive, and constantly wants money. Is she a prostitute? Well yes, but this isn’t apparent in the film as if she needs some mystique. Also the narrative is so disjointed. Eva along with a  ‘friend’ break into Jones Italian house and she bathes while listeing to Billie Holliday. Jones arrives and doesn’t throw them out, in fact on seeing Eva he invites them to stay. Huh? She refuses to speak to him. She leaves. He somehow finds her in Rome. It’s exasperating! And it’s damn miserable despite its jazz soundtrack. I felt wet through and depressed watching it.

Even the masks, the endless mirrors, and the scenery as they flit through Rome couldn’t make me like it and I wanted to like this so much, but despite its plaudits as a ‘classic’ It’s just a mess with nice scenery.

However, this is an Indicator release and they take a lot of somewhat ‘lost’ films and repackage them with amazing extras. I’ve said it many times about Indicator and why they excel over other similar companies, it’s because even if the film is dodgy, the extras are ALWAYS entertaining AND informative, rather than being dry academic and boring rolled out by the same old people, and the same applies to this release with fantastic special features as well as all the variants of the film to watch too.

I used to live in Los Angeles and write about Rock bands. Now I live in wonderful Wales and write about films. I like video games (especially RDR2) and am also a painter...gratuitous plug: follow my art account on Instagram @artbytinar
Review: Uncle Buck Review: I, Monster