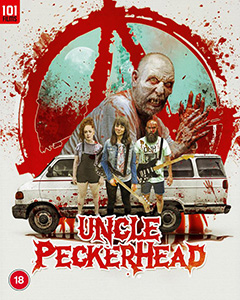 They are going on their first tour and just as they’re about to put their gear in the car, it gets repossessed. Coming up with the brilliant idea of approaching people they don’t know and asking if they can lend their van (??) they bump into a man called Peckerhead (David Littleton) who offers his van and also his services as a roadie. The only problem is, and unknown to the band, at midnight Peckerhead turns into a flesh eating monster.

I’d like to call this a delightful film, however, that isn’t punk enough. It’s funny, its gory and considering this is a small indie film, all the performances are spot on.

Seeing bloody practical effects make this film even more enjoyable. It does suffer a shift in tone near the end, becoming very serious, losing the humour and amping up the horror/thriller element, but it does work, it also leaves the door open for Uncle Peckerhead 2.

Make sure to listen to the cast commentary too!

I used to live in Los Angeles and write about Rock bands. Now I live in wonderful Wales and write about films. I like video games (especially RDR2) and am also a painter...gratuitous plug: follow my art account on Instagram @artbytinar
Review: Demetrios ‘The Big Cynical Adventure’ Soundcheck ’em out: Kent Hilli, Hunted by Elephants, Girish and the Chronicles