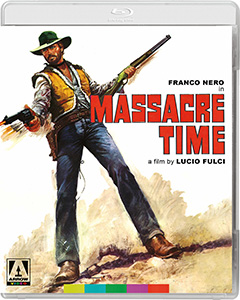 After the huge success of A Fistful of Dollars, Italy started churning out westerns. Fernando Di Leo had previously co-written A Fistful of Dollars, For a Few Dollars More, A Pistol for Ringo and The Return of Ringo, so it’s a no brainer he’d eventually be given  his own film, that being Massacre Time.

The film’s title was taken from the novel Tempo di massacaro by Franco Enna and director Fulci would later claim that he pushed Di Leo to make the film as violent as possible, which Di Leo denied.

Originally slated as an Italian-Spanish production with Ringo co-star George Martin attached to the leading role of Tom Corbett,  Spain backed out after Fulchi wouldn’t tone down the violence preventing Martin from taking the role.

Having decided to shoot the film in Italy on a low budget, Fulci instead cast Franco (swoony) Nero as Tom after seeing production stills from Django. Uruguayan (yes really) actor George Hilton was cast in the role of his drunk brother Jeffrey.

The story itself isn’t such a straightforward vengeance tale, but rather one with a twist. Tom Corbett (Nero) is a prospector who receives a message from a family friend named Carradine, telling him to return to the family home in Mexico where he lived with his wealthy widowed mother.
Years earlier upon her death, she left the house and land to Tom’s brother Jeff, and insisted that Tom be sent away on the condition she support him financially. Tom finds the house where he grew up in is derelict and is told the land belongs to a man called Mr Scott.

It must have been very violent in 1966, but of course is pretty tame for us today. Like the other films in the set, it IS a spaghetti western but…. different somehow. The vibe of all the films is a bit ‘off’ in the sense that although everything is there to make it fit into the western box, it’s more than that.

My Name is Pecos 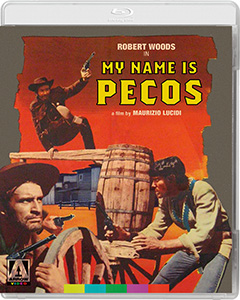 A twist in the genre by making the ‘hero’ Mexican. Pecos is played by Robert Woods, and let me just get this out of the way. For some reason, make-up on the film have GLUED the far corner of both of his eyelids to the top of his eye, so any close up on the hero is very unsettling and VERY distracting. Obviously they thought to make him look ethnic’ he had to have weird eyes.

Well if that hasn’t put you off, Pecos is a great and ‘different’ western.
The small western town of Houston is controlled by  Clane (Pier Paolo Capponi) and his gang. They stole $80,000 only to be double crossed by one of their gang who has hidden it somewhere in the town. Pecos (Robert Woods) rides into town and … yes it’s another vengence story.

Written by Adriano Bolzoni (A Fistful of Dollars) Pecos is a worthy addition to the set, if only for the fact the main character isn’t a blue eyed blonde. Directed by Cult filmmaker Massimo Dallamano (What Have You Done to Solange?) under the pseudonym of Max Dillman and was his only foray into the western genre.

Enrico Maria Salerno (who we’ve recently seen in part of Arrows ‘Years of Lead’ boxset) stars as gunslinger Richard Martin, who is unfortunate enough to be travelling on a train that gets robbed by outlaw Billy Kane (Ventanini) and his gang. He tries to defend the people on the train and gets his hands shot when captured by the gang.

Years later, Martin runs a Wild West show and employs a fugitive named Ricky Shot (Jenkins), teaching him the art of being a crack shot as part of the act. Ricky becomes Martin’s hands, and perhaps his very own hitman on the trail of Kane. But it turns out that Ricky also has a past with Kane and eager to accomplish his own vengeance against the outlaw.

Another interesting character in this is Betty Starr (Maria Martin) who plays an aging prostitute and past love of Martin’s. She may have a frilly blouse and a heaving bosom, but seeing an older woman in a western, especially one from 1967, was refreshing!

It’s another vengeance spaghetti western, but along with the other titles is slightly off-kilter in style and feel for the genre, making it ‘different’ and unsettling.

Great performances all round especially Salerno (who interestingly was the Italian voice of Clint Eastwood in the Dollars trilogy).

And God Said to Cain 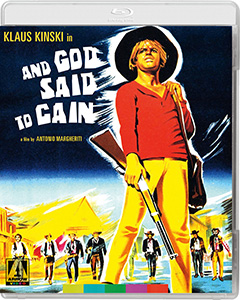 Gary Hamilton (Klaus Kinski, I have to admit that name did make me chortle) has been doing hard labour for the last ten years in prison when he is suddenly pardoned.  Gary (looking very handsome as this was just before Kinski became ‘God’…google it) rides back to his hometown via stagecoach and meets Dick, a young man who he soon finds out is the son of his old enemy Acombar (Peter Carston) who had him  framed for murder.

On returning to the town he finds out his old lover Maria is living with Acombar.

A tornado is coming, in more ways than one, as Hamilton, hidden by the swirling dust, picks off Acombars men one by one, helped by the townsfolk who hate the man who has taken over their town.

If ever there was a Gothic Western this is it.

Just the sight of Kinski, the sunset behind him, atop a horse in a huge Puritan hat, gun in hand ready to wreak vengeance on his wrong doers, is like Dracula stepping out of the dark and into the light of the old west. Not only his look, but the way he moves, at 5ft 8 Kinski appears to be 6ft 4 in this film. He dominates every scene with sheer presence, and I found myself wondering, if like in High Plains Drifter, Hamilton might be a ghost.

All four films in this collection are brilliant. But this last one, not just because of Kinski, is the stand out. I’d never seen it before and was knocked out by its ‘presence’.

As usual Arrow have done a sterling job, and to write about all the extras would be an essay in itself.

Unmissable set  for the western genre.

I used to live in Los Angeles and write about Rock bands. Now I live in wonderful Wales and write about films. I like video games (especially RDR2) and am also a painter...gratuitous plug: follow my art account on Instagram @artbytinar
Review: The Daimajin Trilogy Kris Barras Band Announce Biggest UK Tour To Date For March 2022