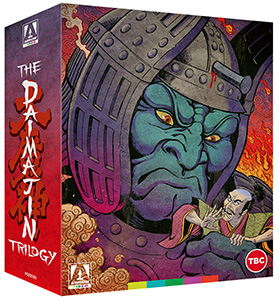 A trilogy of films by Daiei Studios, all shot within the same year with predominantly the same crew, albeit with different directors and various cast members.

All 3 films follow the same basic structure: people are terrorised by bad guys for 2 thirds of the film, and then in the final act the mighty Daimajin rises up to inflict some ass kicking (and building stomping) justice.

The 3 films have decent enough stories which kept me engaged, with Wrath of Daimajin being my favourite, which follows a similar path to the latter Gamera movies and focuses more on the younger members of the cast and takes things in more of a “Goonies” direction.

While the narratives are fine and the samurai action is good to watch, all 3 come into their own during the final act when Daimajin appears and begins to destroy things.

Well designed (reminding me somewhat of a Samurai version of Talos from Jason and the Argonauts) and well “eye acted”, Daimajin’s scenes are by far the highlight of all movies.

I’ve always loved the Godzilla and Gamera movies, but for some reason had never even heard of Daimajin before this Arrow Films box set, and I’m very pleased that they have made it yet another fantastic package for newcomers such as myself, as well as long time fans .

The audio commentaries are a goldmine of information, while the interviews and new introduction by Kim Newman flesh everything out in an informative and entertaining way that draws you into the Daimajin world even more.

Well packaged, and with special features that will keep everyone busy for a long time, this trilogy of films looks superb on blu-ray and is yet another Arrow Films box set that is a worthy addition to anyones collection.